"It Was A Complete, Complete Bust." What Happened At The Missouri Muzic Festival? 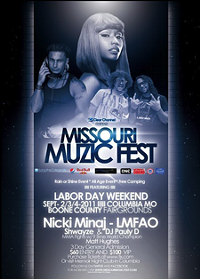 On Saturday afternoon, the organizers and operations management of the Missouri Muzic festival stood watching a weather forecast for Sunday predicting more storms. It was raining hard and the wind was picking up a bit, and after a summer with one stage disaster after another, they decided to play it safe and cancel everything left -- Saturday's remaining shows and all of Sundays. When the next day brought sunny skies and gentle breezes, it must have felt like par for the Missouri Muzic Festival course: From the initial planning stages on, it seems like anything that was supposed to happen didn't.

"It was a complete, complete bust," says St. Louis artist P.R.E.A.C.H. He was supposed to perform at 2 p.m. on Saturday. He was joined on the lineup by names as big as Clinton Sparks (who showed up at the Boone County Fairgrounds, where the Fest was being held, but never played) and Tech N9ne (whose set was among those cancelled). "We would have been performing to literally the three sound men," says P.R.E.A.C.H. So they waited. Festival organizers were hoping the crowd would show up after the University Of Missouri's first home football game of the season, also on Saturday, but it never happened. Angela Haynes, who helped produce the Festival, says the final attendance for both Friday and Saturday was "a couple hundred." At one point a couple months ago, when they were announcing Nicki Minaj as a headliner (she was removed from the lineup shortly thereafter), representatives of the Festival were predicting a crowd as large as 75,000. As late as Saturday morning, organizer and promoter Jeff Lamm told the Columbia Tribune that he was still predicting 10,000

St. Louis hip-hop collective 12 to 6 Movement did ultimately play, albeit late. Member JusTime describes the scene when they showed up on Saturday: "When you pull up and you see cops blocking off roads and blocking traffic, you expect something when you pull through the gates, and it was a ghost town. There were more Porta-Potties than people."

"I was still thankful for the opportunity. I was definitely glad to make the trip. The area was good," he says. "Columbia's a gold mine."

The first year festival had plenty of problems -- the competing football game and the attendent strain it put on the Boone County Police force was just the beginning. There was also a ticket price that, at $40 for one day and $60 for three days, may have been better suited to the Fest's original lineup instead of the one it delivered, with half of LMFAO playing a DJ set as the marquee headliner.

There was camping allowed on the Fairgrounds, but attendees weren't allowed to bring in outside food or drink. "A lot of people in Columbia were stunned when I told them there was a music festival," says P.R.E.A.C.H. "It was just really unorganized. I was proud to be a part of it. However, it was disappointing.

"There was absolutely nobody. It was an empty campground. And again I'm not taking anything away from the organizers. It kind of hurts to see that it didn't go through."

Many fans took to Facebook on Saturday after the news came through about Sunday's cancellation, speculating about artists pulling out last minute or low ticket sales causing organizers to simply throw in the towel. Missouri Muzic Festival Publiscist Jane Higgins, who was brought on a few weeks ago, says the concern was strictly weather related. "The forecast said the storms were going into Sunday," she says. "There was bantering about whether they should cancel it or not. When the gusts of wind got up to 50 miles per hour, that's when we shut it down on Saturday. They didn't want another Indianapolis."

"My sense was it was not a good showing. But I never, ever heard, 'We're canceling because of ticket sales,'" she says. "Nobody pulled out. It wasn't about tickets."

You can get a 50% refund on all passes purchased ahead of time. Email [email protected] for instructions.

"I really hope there's a Missouri Muzic Fest next year, knowing what went wrong and how to fix it," says JusTime.