It's A Small World, As Re-imagined By An Under Cover Weekend Bands 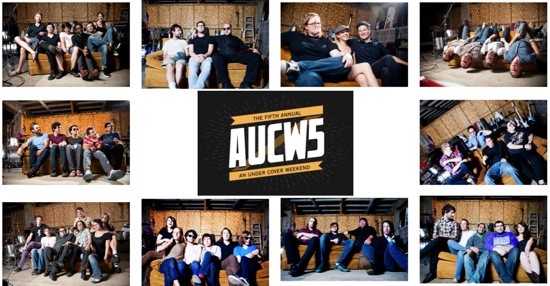 Now in its fifth year, An Under Cover Weekend has ten local bands play a set of covers by an idol or influence of their choosing. Spread over two nights and almost certain to sell out, this years incarnation spans maybe the widest range in the event's history: Via Dove will play as AC/DC, Dots Not Feathers will plays as Stevie Wonder, the Jump Starts will take on the Violent Femmes catalog and so on.

In the spirit of pursuing novel what-ifs, we asked a few of the participating bands the following: Suppose there is an It's A Small World style ride at an amusement park, but its theme is instead one song by the artist you are covering for AUCW. That song, on repeat, is the soundtrack, and the ride, its operation and backdrops, are all based on the song. You must ride this ride for twelve hours a day for a week. 1) Which song do you choose? 2) Describe the ride.

Band: Dots Not Feathers, performing as Stevie Wonder Song: "Sir Duke" "The fact that the chorus repeats itself about a thousand times over yet I still don't ever get bored with it bodes well for my twelve-hour-a-day adventure," says singer Stephen Baier. "The ride would be a music lover's paradise, seeing as the song is a tribute to Stevie's favorite musicians, complete with an animatronics brass section with cameo appearances by animatronics versions of Count Basie, Glenn Miller, Louis Armstrong, and Ella Fitzgerald. Also there would be light-up wall pieces of sheet music illuminating notes notating the intro arpeggios and the downright amazing instrumental bridge. Twelve hours a day each week wouldn't be enough."

Band: Bo & the Locomotive as Cake Song: "Race Car Ya-Yas" "Water from the lazy river laps at the ass of the demolition derby car boat," says front man Bo Bulawsky. "The river picks up speed as you enter the menacing tunnel of Large Fuzzy Dice, Willy Wonka style. Mechanical chickens dance like children, mechanical children cluck like chickens. The fuzzy dice dangling from the ceiling loom ahead like a Deliverance inbred. They are unavoidable; they smack the faces of unsuspecting passengers. The only thing standing between the end of the tunnel and the exit is another boat, full of people in smiling Mickey Mouse mascot costumes. And also you're drunk." 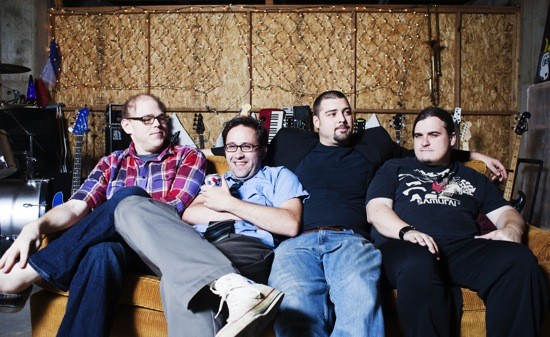 Band: The Orbz, performing as Stone Temple Pilots Song: "It would probably be STP's 'Trippin' On A Hole In A Paper Heart,'" says singer Jason Robinson. "Something about the dexterous guitar work is eminently listenable. That and Scott's lyrics require some time to decipher ― 'eat your Sunday deathbed motorcade' ― plus there's that defiant kiss-off chorus: 'I'm not dead and I'm not for sale.' Twelve hours a day? I could live with that. "As far as backdrop and all that, maybe a Tim Burton-inspired caricature of Scott, all big head and scraggly body, animatronically swaying in his little lithe junkie way in front of a shifting psychedelic display. The DeLeo brothers as a two-headed figure plunking away with furious energy at their respective instruments."

Band: Troubadour Dali, performing as Sonic Youth Song: "Teenage Riot" "The ride starts out with a game of tag," says singer Ben Hinn. "Everyone is sprayed by water, and proceeds to fall into stormy weather. But then we all riot, party and go around again."

Band: Tight Pants Syndrome and Paper Dolls, performing as Electric Light Orchestra Song: "As with all ELO song-themed rides, 'Mr. Blue Sky' seats passengers in a wall-to-wall white shag carpeted, slightly Guinness-stained Wurlitzer jukebox-styled flying saucer and launches them into a world bursting with giddy optimism and more than a little pot smoke," says singer and bassist Brian McClelland. "After a quick blast through an outer space ink black and criss-crossed with countless hazy green lasers, 'Blue' brings its interstellar visitors back down to earth through the brightest and puffiest of clouds for a breezy, low-flying sweep through an English village green on a cool but sun-drenched summer day from a calendar many years past.

"This land's inhabitants, mostly pale chaps in fro/sunglasses/beard combos and Beatle boots, dot the landscape and wave from their grassy knoll blankets and pitched open pub doors, all easy dopey smiles and kind reddened eyes. After a couple loop de loops around the green, with ride passengers high-fiving residents through the saucer's small round portal windows, the ride finally gets hot, literally, with a thrilling light speed jump directly into a smiling, welcoming sun. But by then, of course, they're already happily baked."

Band: Via Dove, performing as AC/DC Song: "I think I have to go with 'Thunderstruck,' even though I'm a Bon Scott era fan," says front man Andy Shadburne. "Listening to 'Thunderstruck' is a thrill ride in and of itself. It's just so powerful and supercharged. It's rock and roll.

"The contraption that you ride in is amphibious and motorcycle-like. So you take off into the dark and up a hill. All you've got is pure darkness, a cool breeze, that high hat and guitar lick that Angus plays, frighteningly loud. Then the growl/chant starts. Still going up As the thun-der-s start, strobe lights flash in sync with the thunder lyric. When the verse starts the ride stops. On a railroad track. Two trains are coming at you. Guns pointed at you. This is getting far more violent than I imagined...

"Everything keeps getting closer and closer, real desperate walls are closing in type stuff, then at the last second you start to move again- guns go off and trains collide with fire and smoke behind you- you can even smell it. You're off down two little fake out drops. And at the 'You've Been Thunderstruck' you hit this insanely long drop. Strobe lights going off everywhere. Cannons, flames firing up out of oil rigs from Texas and girls dancing. All of the rock and roll debauchery and recklessness you'd expect from an AC/DC song themed ride packed into this epic free fall. By the time you get to the guitar solo the ride has plateaued and is zooming along over open water with a larger than life Angus running along side of you in his duck walk/skip move totally rocking out. Then the growl break happens and the ride and the strobes slow down... The ride finishes on a high note out on a faux Australian beach with a huge rock and roll choir singing the last chorus, 'Yeah- it's alright, We're doing fine (so fine) Thunderstruck'. And everything is alright. You find yourself riding and singing along and realizing that being 'Thunderstruck' is not bad at all. It's rock and roll."

Band: False Moves, performing as Interpol Song: "The song would be 'PDA,'" says vocalist and bassist Mike Cracciolo. "And like It's A Small World, it would be a dark tunnel ride. The animatronics in the foreground would be the cutout images of the band and the monitors featuring lead singer Paul Banks from the video. The backdrop would be an endless series of New York City skyscrapers. The seats for the ride would be huge red couches on which riders could comfortably sleep, and there would be 200 of them."