Gillian Welch & David Rawlings at the Pageant, 9/3/2011: Review and Setlist 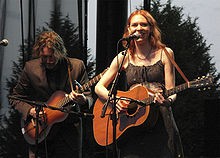 When the mechanics of a rock & roll concert get thrown out of whack -- when the lights flicker, when the bar service halts, when the A/C sputters off -- you become grateful that the night's performers are not at all beholden to the mechanics of a rock & roll show. Gillian Welch and David Rawlings' masterful performance in front of a packed Pageant crowd was never really in threat of being scuttled by the power surges, which came after the early-evening storm that knocked out power to half of the Loop. Had push come to shove (and the Pageant powers-that-be allowed it), the always-acoustic duo would have soldiered on without mics or stage lights. But as it was, some behind-the-board wizard allocated enough juice for the PA, the spotlights, and the bathrooms -- and you'd be hard pressed to find anyone in the crowd that minded the slight inconvenience.

And thank God the show did go on -- Gillian Welch fans, a patient lot, had become tired of waiting. It had been eight years since her last record and four years since her last St. Louis show at the Duck Room. The upgrade in venue size suggests that her absence has increased her audience four-fold, or that this year's The Harrow & the Harvest brought some new fans. Whatever the case, first-timers and long-timers were treated to two sets, two dozen songs and some great stage banter in the face of the impending power outage (including a spitballed definition of a "brown-out" and a pretty amazing story of Welch locking herself out of her hotel room, in nothing but a towel, during the day's tornado-like storm).

The show began with "Tear My Stillhouse Down," but not before Gillian and Dave locked eyes, hummed out the pitch and stomped the tempo. After twenty years together, the two share a preternatural intuition that makes each song feel at once like a new creation and an old standard. Nothing feels phoned in or rote, especially Rawlings' plentiful, mind-bending solos. On his three-quarter sized Epiphone Olympic archtop, Rawlings circles around notes and patterns like a predator and takes the simple frame of these songs somewhere deep and mysterious. He doesn't hold his guitar like a Springsteenian phallus or a punk-rock machine gun; he uses it more like a divining rod, held away from his body at a 45-degree angle and whipping the headstock around like a lasso or a pair of snake tongs, depending on the mood.

And about that mood: You'd be a liar to call the bulk of Welch's songbook "feel-good music," and the material from the new album has as much to say about the wages of sin as any Old Testament prophet. "Scarlet Town" came early and, even for a new song, it can already stand up alongside "Sin City" and "House of the Rising Sun" in the travelogue-from-Hell playlist. Fans have been hearing The Harrow & the Harvest standout "The Way It Will Be" on tour for years, but last night's version peered deep into a type of loss that surpasses heartbreak. Rawlings' nimble plucks played against Welch's easy strums throughout the tune, creeping in like a gentle death.

But this is what we love about Gillian Welch songs -- her saddest, hardest songs never stoop to self-pity nor require empathy from the listener. These are solitary, late-night feelings that we decide to share in a concert hall with 1,500 of our closest friends. And that kinship makes the sweet spots -- and there were many -- that much sweeter. "Elvis Presley Blues" floated in like a dulcet-toned dream, and the extended quote of the King's "All Shook Up" was met with a few whoops and hollers. Another new one, "Tennessee," was as languid as slow-drip molasses as Gillian savored the relaxed tempo. The first set ended with a bang -- "I Want to Sing that Rock & Roll" brought their harmonies in closer union, and "Red Clay Halo" was met with sing-alongs and claps, especially after Rawlings capo'd his guitar mid-solo without missing a note.

As it turns out, the intermission break would be the last time we'd see the house lights go up and the last time we'd be able to get a drink. After the power went down in the main hall and the generators were doing their best to keep the show going, the bar's cash registers refused to play nice. (Lo, how technology has failed us). But the hiccup brought a new energy to the second set. Thankfully, whatever sound issues kept the first half of the show sounding muddled were immediately improved, and Welch's demeanor seemed to loosen up in the face of possible crisis. The autobiographical "No One Knows My Name" was aided by some Neil Young-esque harmonica from Welch, and the pair shared a mic for a spirited "Six White Horses." There was even a slight spring in the step of "Revelator," still the pair's most devastating song and one that brought plenty of applause at the outset.

Rawlings took over the mic for his own "Sweet Tooth" and, in the case of Welch's sudden disappearance from the stage (wardrobe malfunction? I couldn't tell), he killed time with a pass at "Big Rock Candy Mountain." Welch returned for "Caleb Meyer" (or, as Rawlings cheekily said, "one more killing song"). A few encores brought out fan-favorite "Look at Miss Ohio" as well as Townes Van Zandt's "White Freightliner Blues." And as the A/C-less venue began to reach its sweltering apex, Welch and Rawlings took us to church with "I'll Fly Away," originally recorded for the O Brother, Where Art Thou? soundtrack. In the end, it's OK that we had to sweat it out for these songs. Lord knows Gillian and Dave did too.

"It's the Off Broadway experience at the Pageant!" A text from a friend, in regards to the in-house heat.

"I want to fuck her voice. Does that make sense?"

Time (The Revelator) is very much my favorite record of the past decade. I don't know if there's another working musician who gets the scope of American music and bends it to her will like Welch. I also think that her song "Hard Times," done up beautifully last night, should be our new national anthem.