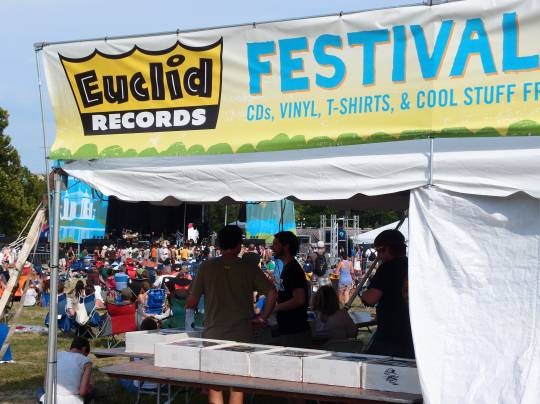 The folks over at the Euclid Records tent might have been in the best position to judge which bands killed it at LouFest. Which bands impressed and connected with the people enough to send them rushing to drop ten bucks on an album that they could probably rip for free online.

During the acts, the Euclid Record tent would feel spacious, with people flowing in and out to browse through the deep record collection and wile away the time before their favorite groups hit the stage. But when certain acts finished, the tent would be packed, with people lining up to add another CD to their musical arsenal.

And if the LouFest bands were to be judged by their ability to move records, the weekend's winner was undoubtedly Ume. The band's CDs sold quickest. By the time the band made its way over the tent for an autograph session after the performance, 28 of the 30 stocked CDs were gone. Ume had to provide Euclid Records with with extra copies to keep up with demand.

"If we would have processed the sales faster, they would have been gone in five minutes," said Anna Zachritz, a Euclid Records employee.   A band's ability to move product at a festival like LouFest indicates a couple of things. First, it illustrates the passion the music ignites in listeners: That listeners support the band enough to spend the money. More than that though, it highlights the band's potential. A headlining band like TV on the Radio may not move as many albums as a band such as Ume, mainly because many festival goers already have their album. People already know about them.

So festival sales essentially represent the new fans a band acquires: A fan may come to LouFest to watch TV on the Radio or Questlove, only to discover an appreciation for the lesser-known undercards.

According to Zachritz, Deerhunter and Lost in the Trees also had especially high sales numbers.

Album sales at the festival were also bumped for bands that held autograph sessions at the tent. That was partly for practical reasons.

"People come over and they want something for them to sign," she said.

In an era of free music, this may be the new model for record sales. Buying CDs has become a referendum on a band's personal connection with listeners.