TV on the Radio at LouFest: Review 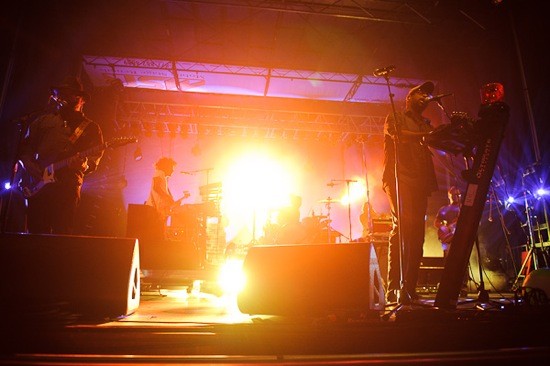 Camp is now over. We made some friends, explored the various activities, baked in the sun and shared in bonding sing-alongs.

It's tough to separate out the parts so soon after an overload like a two-day music festival. When I close my eyes I can see the outline of the Orange stage etched onto the backs of my eyelids. I can feel blood flowing to my legs and feet from standing for so long. What happened out there? The images float vividly, randomly: people tossing Frisbees by the entrance, volunteers sorting garbage into recycling and compost boxes, the middle chunk of the field covered with lawn chairs and blankets, the sun setting in bright colors opposite a rainbow ("Das Rainbow," observes Chan Marshall). The lines for the Porta-Potties, the giveaways in the Chatter Box, the climbing wall. By the middle of the day Sunday it seemed impossible to talk about anything but the festival: What was your favorite show so far? The answers were encouragingly varied; I heard in vaguely descending order of frequency Ume, Deerhunter, !!!, the Low Anthem, the Hold Steady, Old Lights, Troubadour Dali, Lost in the Trees, Kings Go Forth and Dom. I'm sure I could have found someone in favor of every set. Everyone's got a pleasant surprise and a letdown -- the specifics always followed by expressions of general contentment. The size is manageable, the amenities are thoughtful and the fact that this thing exists right here in Forest Park is damn good.

The feeling by the start of TV on the Radio's set was sort of like the one you have when grandma brings in a spectacular-looking pie after Thanksgiving dinner. (The temptation here to assign Thanksgiving foods to each band is almost too powerful in my festival-addled state to suppress, but I will.) Still, there's no question, absent the Roots, that TV on the Radio is the biggest deal in the lineup and it draws the biggest crowd -- the first of the festival at which you cannot easily wander front and center.

The band did not miss the opportunity for a literal presentation of its latest album title, Nine Types of Light. There were hanging LEDs , rotating perforated spotlights and a siren light in front of singer Tunde Adebimpe. He used it only once, saying, "It's an emergency party!"

None of the seven men on stage said much between songs, but they didn't squander opportunities to engage the crowd. Best St. Louis reference by an out-of-town band all weekend is a tie between Adebimpe and his bandmate Kyp Malone. Respectively:

"I was born in St. Louis, Missouri. I was an infant; I only remember colors and shapes and the occasional breast."

"You guys have a new Chuck Berry statue, right? We're gonna go down there after this and make out with teenagers. You're all welcome to join us."

They also played music. TV on the Radio has a track record of accolades nearly unparalleled among its contemporaries. Those were earned first with a debut full-length and its lead-up EPs that were all bursting in a thousand directions at once, guitars and horns and Adebimpe and Malone's distinct voices and a full symphony of found sounds and rendered waves looped over each other in songs that nevertheless kicked ass straight into the next one. From there, the focus has cleared and space has opened in many of the new songs, but the ideas remain as original and vital as ever.

At LouFest, many of those equally-weighted, non-concurrent parts wound up in a floodplain of noise. Though that worked out alright -- the critical things protruded. Adembimpe, who sounded like he might be fighting off a head cold, still tore into the big melodies. Horn discord lent rising panic and Malone's strange harmonies hummed over the mix. The squall was entrancing. People danced to the early stuff and held up lighters for the protective bubble of the ballads.

Behind the crowd, festival volunteers and booth proprietors had already dismantled much of the makeshift city we'd been occupying all weekend. The band finished its encore at 9:45 p.m. with "Dancing Choose," which is the brightest bang in the catalog.

This was fun. Let's do it again next year.