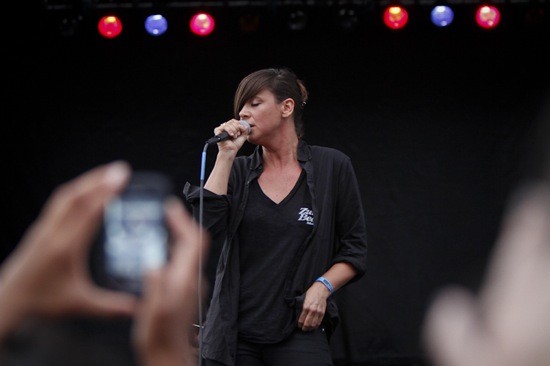 As you certainly know if you were one of those who remained among the 7 p.m. crowd long enough to formulate a Tweetable opinion (CAT POWER BORING! SUCK! #loufest) before departing for the Chatter Box to fart another snappy epistle into the digital ether, the latest turn in Chan Marshall's career has her blues-ifying anything and everything -- even things that an audience might not wish to hear blues-ified, well-known hit songs from the '70s in no way excluded, and the blues-ificiation of which may, by the end of the third song, result in an observable exodus toward basically anywhere within the festival grounds that might be less bluesy.

Such was the scene at the Orange Stage, where eyes gazed sky- and Nosh Pit-ward and the idle chatter competed with the music, the slow seepage of audience accelerating through the middle of the bluesy set and leaving the crowd at less than half its original strength by set's encore-less end. Apparently folks don't appreciate the bold social statement, to say nothing of the artistic risk, of blues-ifying Fleetwood Mac.

But you have to feel like "Dreams" was doing just fine as it was -- you know, as an example of basically unimprovable songcraft -- and that it had no immediate need for the type of reinterpretation that involves gutting a song of all recognizable melody, rhythm, tempo, and Buckingham/McVie harmonies, leaving nothing but the lyrics to be sung smokily and strung bluesily over yet another dragging, bluesy rhythm. Same goes for "These Days" and whatever else I may have missed by virtue of the fact that it was virtually unrecognizable via aforementioned reinterpretative evisceration.

Perhaps even more criminal was what this formula wrought of her own material. For example, let's go with "Metal Heart," from 1998's Moon Pix and the second song of the set. On record we have a clean, lazily strummed guitar, some expertly struck snare/kick/cymbal work, and double-tracked vocals running at full melodic capacity and making optimum use of the careful, deliberate phrasing characteristic of the demonstrably genius songwriter Chan Marshall once was.

Onstage in 2011, however, we have -- you guessed it -- the same lyrics, but sung with only the loosest semblance of the original's slaying hooks and phrasings; we have the song deconstructed, robbed of all charm and emotional heft, and reconstructed with prefab, post-Clapton blues. And the crowd was having none of it, or at least a quantity of it proportionally insignificant enough to overlook in this context.

Only once did the gradual migration appear to cease, for what might have been the most effective song of the festival: a slow-building "The Greatest," rent epic by the gathering darkness and, for once, a stolid refusal to mangle a perfectly good song; a perfectly good and mercifully unmangled song that, by the thoroughly unhinged climax, left the remaining crowd fairly stunned at the sudden windfall of genuinely engaging music. Let's have more of this next time.