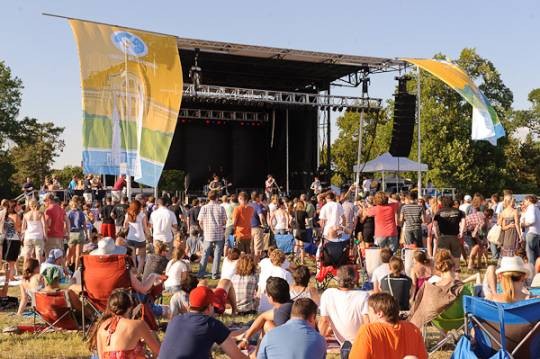 Not much excitement going on at the LouFest first aid tent at the moment. The on-duty paramedic, a fifteen-year vet named Douglas Randell, sits on a white plastic chair, tinkering with his phone.

It's been a low-key day so far, he says, as the afternoon heat peaks. One youngster had to ride away in an ambulance earlier, some say because of something to do with heat and dehydration and maybe alcohol, but Randell can't go into any details. Other than that, though, its been all bandages and sunscreen.

Many injuries so far, he notes, have been flip-flop related. Straps break and cut skin, sending women and men to the tent in need of Neosporin and band-aids. And a few people have suffered some bad sunburn.

But Randell keeps his guard up. He leans back in his chair, but his mind is on point, his reflexes trained.

"This is probably the coolest part of what I do as a paramedic," he says. "Waiting on that life-threatening situation. That call will sneak up on you and you gotta perform right there."

When it comes to festivals like these, he says, traffic at the first aid tent all depends on Mother Nature. The hotter it is, the more he's moving.

"The weather is boss," he declares.

Heat brings the dehydration and the passing out and the exhaustion. And while it's kind of hot today-- hot enough to drain energy and soak t-shirts-- it's not dangerously hot.

A few of his colleagues are making rounds around the grounds. It's his turn to man the station. So there he is sitting in the white plastic chair, holding down the tent...

Uh-oh, here comes a man. He's walking briskly toward the tent. Is that a grimace on his face? He is limping mildly, unless that tilt is part of his normal gait.

"I got a a blister," says the man, with a self-depreciating smile. "Yeah, nothing too exciting."

He and Randell share a chuckle. The man takes off one of his sandals. Randell fishes a cushy blister band-aid our of a blue canvas bag and sticks it on the man's foot.

"Thanks," says the man, as he turns around and heads back to the meat of the festival.

"And that's pretty much it," says Randell, shrugging his shoulders and resting his arm on the seat-back.

A few hours later, there is a commotion. A radio call. Randell and three other paramedics trek out of the tent, speed walking, direct and urgent, in the direction of the Orange stage. They march in a straight line, with one a few yards behind the pack.

They find a girl on the ground, her friends standing around her. The paramedics crouch down and ask her how she's feeling and what happened. The girl, who is wearing a purple flowery dress, is sitting up, knees bent, palms pushing up against the ground. After a minute or two of comforting, the paramedics help her to her feet. She staggers a bit. Randell puts his arm around her to steady her and the group walks slowly to the tent, where the girl sits down and the paramedics take her blood pressure and perform a couple of basic tests. An ambulance pulls up to the front gate, just in case. But she is fine. And soon one of her friends keeps her company at the tent.

The sun is finally setting and a cool breeze rushes through the park.