LouFest: Where Recycling Tents Have Pushed Garbage Cans Out of Business 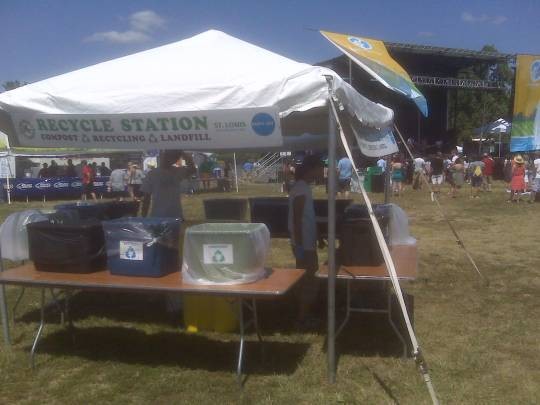 There were, at first, several black steel garbage cans peppered throughout the LouFest grounds. Garbage cans are great because you don't have to think when you throw things into them. Banana peel, paper plate, aluminum can, plastic cup, chewed gum, half-eaten burger, whatever. The garbage can doesn't discriminate. Unlike those damn recycling bins -- paper here, plastic there, compost here, aluminum there. It's madness!

But Stephen Kielbasas is a recycling bin kind of guy. He works for St. Louis Earth Day's Recycling on the Go, which provides recycling receptacles at various events and festivals. They had five tents spread around the festival, each one offering bins for Compost, Recycling, and Landfill. So early in the day, Kielbasas went around and flipped over those black steel garbage cans, which made them look like oil drums, eliminating the disposal competition.

"When they're out there," he said, "people would naturally use them."

This was disorientating for some. In the mid-afternoon, a man in a blue shirt holding a used paper plate and crumpled up napkins instinctively looked for those black steel cans. He wandered around the Nosh Pit eating area for a minute or so, confused, before noticing one of the recycling tents. He approached the tent and stared at the labels for the bins for a few seconds. Then he tossed the plate and napkins in the Landfill one, which, apparently, seemed like the right thing to do.

As the man in the blue shirt walked away, the Recycling on the Go staffer holding down the tent pulled the plate and napkins out of the Landfill bin and put them in the Recycling bin.

The man in the blue shirt's mistake was an outlier, however. According to Kasey Strawbridge, another Recycling on the Go employee, the LouFest patrons deftly maneuvered the garbage disposal process.

"Last year around 25 percent of people put things in the right bin, but this year it's been great," she said. "Probably around 75 percent, I'd say."

The labels on the bins, she pointed out, were brighter and clearer this year. But more than that, she suggested, people are getting more accustomed to recycling.

"It's trendy now. People are more aware," said Strawbridge, before adding with a grin. "If the consciousness of people keeps improving like it has over the last ten years, we're not gonna have to worry about the world ending."

The bins at the recycling tents presented the most telling evidence of Loufest's efforts to be Green. Recycling and Compost each emphatically outpaced Landfill.

It is also difficult to let yourself litter when there are large signs that say "Recycling Station" every few yards.

As the sun began to set, a young man wearing green wayfarers sat at one of the wooden picnic tables eating a beef frank from the Buck's Good Eats tent. A gust of wind sent three of his napkins flying over his shoulder and into the grass just behind him. He was unfazed, didn't even look up, and took another bite. Then he put his aluminum wrapped frankfurter down and stared straight ahead, seemingly into space. He slowly got up, turned around, and lumbered over to each of the napkins. He clutched them in his left hand as he ate and after he was finished he strolled over to the recycling tent.