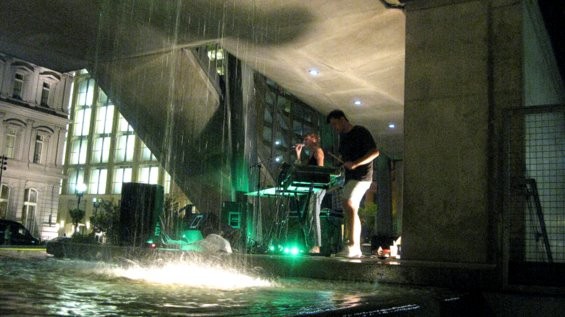 Perhaps it's time for St. Louis to swap the official motto, Gateway to the West, for it's unofficial one, "If you don't like the weather, wait 15 minutes," with the addendum "and then leave the house anyway."

Though some sprinkles, Rams fans occupying every parking space in downtown and a tweet misfire from the Luminary Center for the Arts (@theluminaryarts) that High Places would play first to beat the weather were all conspiring against fans of the dreamy Los Angeles duo on Saturday night, a goodly number of humans made it to the Old Post Office Plaza for what turned out to be a glorious evening under a partially cloudy summer sky. Oh yeah, High Places set was further delayed because half of the band's equipment was accidentally taken to California instead of St. Louis (we're always getting mistaken for that sun-drenched coast) and the assemblage cheered the cab driver who returned their luggage.

US English bowed out of the show, opting not to play since they were running the event and needed their wits about them--I think we're all a bit wary of outdoor shows given the all-too recent tragedies at Pukkelpop and Indiana, but Ra Cailum delivered an awesome opening set as he always does. Judging by his new stuff, this cat is evolving faster than we can think.

Unlike previous Post Performances, the musicians were set up under an overhang in case the rain returned, playing behind a waterfall and a massive statue of a man's torso, which was perfectly suited to High Places' organic meets man-made sound. Playing heavily from their new album Original Colours, due out on Thrill Jockey October 4, they started the album's bookends, the skittering electronic drums and desolate wanderlust of first single "Year Off," followed by the sublime "Altos Lugares" which closes it. Nearly every song had a chimerical quality, acting as living travelogues--sample snippets took the mind to fruited trees in the Amazon where birds gripe in loud voices, to unseen deserts with dry, howling winds and bugs screaming in the night, empty pastures in the American South, while Rob Barber's percussive musings countered with totally different ideas of nature; cell repair maybe, or the atomic breakdown of DNA. You know, if those things had sounds. The juxtaposition of trance licks, Middle Eastern and African flourishes, house beats and wide-eyed wonder at the natural world gives a certain levity to their sound that would seem gimmicky coming from anyone else. Mary Pearson's bell-like mezzo soprano is as beautiful and pleasantly haunting live as it is on record, though the best evidenced on the "ai-ai-ai-ai" chorus of "Sonora," which I could have listened to all night. She breathed a few timid "thank yous" into the mic between songs, and the pair closed with the lush and enveloping "From Stardust to Sentience." The shift from their earlier meandering structures to a more traditional format was incontestable in light of the last song, but if 2010's High Places vs. Mankind was fantastic, and 2011's Original Colors is pretty much incredible, then good golly I can't wait til 2012, apocalypse be damned.