There's good news and bad news here: Depending on how you feel about the literature giant, the July 18 news that Borders is closing its doors and liquidating all of its merchandise comes with heavy hearts and lighter wallets. Well, we have more news for you: It has been one month and one day since our last news, and a 40% discount on music is not nearly enough to make it worth going out of your way.

After a jaunt to the Brentwood Borders location yesterday in search of the best music available, we found that almost all of it still is. And for the most part, it's still a little steep. Although the shelves have thinned down considerably and only the top two in each section are "full," the store is still packed with new releases and classics worth stopping for (and some worth skipping).

Instead of the Cuban jazz and Michael Bolton albums we expected would populate the remainder of the section, we were greeted with a surprising wealth of CDs actually worth picking up -- and an even larger number of those somewhere in between. Below, you can see that both Gin Blossoms and Ghostface Killah are now equal in their quest for a moderately discounted new home. 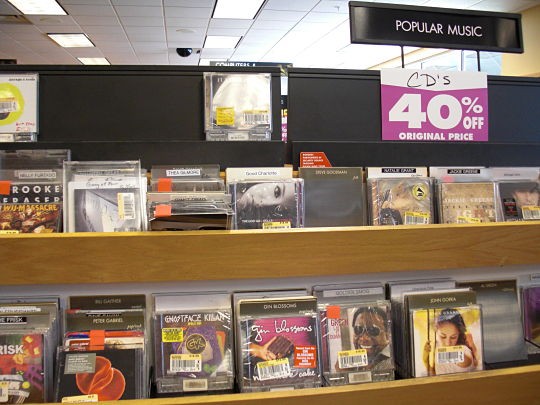 The music section is currently discounted 40 percent, though the rest of the store's merchandise ranges between 40 and 60 percent off. This means that the albums that were previously overpriced at $19.99 are now priced at a fairly typical $11.99. That new Joss Stone CD, which used to be an above-average $14.99, is now a fairly average $8.99. Key prices: The three-disc Joanna Newsom album, Have One On Me, is now $16.97, while Britney's Femme Fatale is $11.99. (Even on sale, the poptart is cheaper.) If you're looking for a sale that is roughly as cheap as Vintage Vinyl or Euclid Records' regular prices, look no further than your friendly neighborhood slowly fading literary megastore.