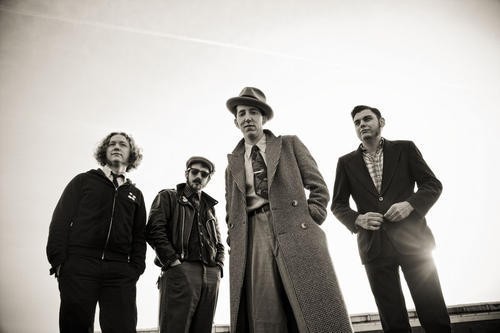 Pokey LaFarge and the South City Three will officially release full-length Middle Of Everywhere tomorrow in a pair of shows at Off Broadway. The album's already had plenty of play, from a spot on NPR's First Listen to reviews in places like Billboard and Mojo.

The early show is seated and starts at 7 p.m. A later show, with Colonel Ford opening, begins at 9:30. Both are $10 in advance or $12 day-of-show, and there's a $3 surcharge for minors. Read Christian Schaeffer's Homespun review of the album and listen to "River Rock Bottom" below.

In the past year, St. Louis transplant Pokey LaFarge has made a lot of famous friends and fans: He has recorded with Jack White, played the Newport Folk Festival and been celebrated on National Public Radio. It's not hard to hear why -- LaFarge's lovably anachronistic take on jump blues and easy-pickin' swing jazz goes down like vodka-laced lemonade, and his have-to-see-it-to-believe-it live shows have made him a local favorite. But it's easy to read the title of Middle of Everywhere as a response to LaFarge's growing fame: This music and its makers don't come from the middle of nowhere but represent generations of American blues, jazz and folk styles from all over. That little bit of flag-planting is as much of a statement as you're ever going to get from LaFarge, a singer who prefers to keep things simple -- he needs little more than pretty girls, strong whiskey and the freedom of the road to make him happy. All those are in abundance on Everywhere.

For this LP, the quartet's sound gets embellished in tasteful, era-appropriate ways. One would never expect LaFarge and the South City Three to, say, blare electric guitars (though, never say never!), but the additions help flesh out the songs without drawing focus from the singer's pinched, warbly and easy-flowing vocals. Lugubrious horns attend the opening kiss-off "So Long Honeybee, Goodbye," and some rattling steel guitar playing gives the next track, "Ain't the Same," a touch of the Delta. LaFarge even gives his adopted hometown a sweet shout-out on "Mississippi Girl," alongside plenty of blustery harmonica and spirited hollering. LaFarge's good-natured and commanding presence stands at the center of these songs, but the efforts of the South City Three -- bassist Joey Glynn, washboard/harmonica player Ryan Koenig and guitarist Adam Hoskins -- show that these players are supportive, unfussy sidemen at every turn. Likewise, their harmony vocals on tracks such as the sweet-and-low "River Rock Bottom" help make this disc a true group effort.