Chris Brown Loves To Hit Women, According To A Speech Bubble Shrink-Wrapped Into His CDs 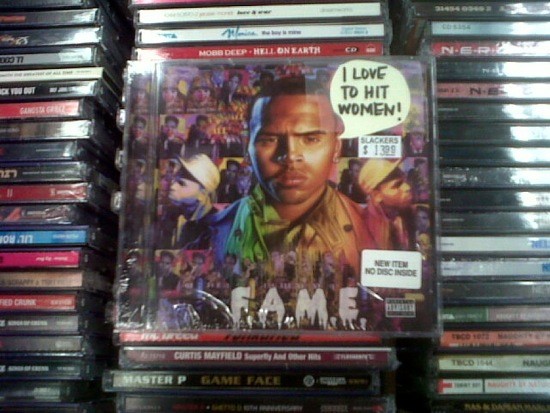 The above photo was taken in the St. Louis Mills Mall Slackers. Both Chris Brown CDs the store has in stock have the speech bubble shrink wrapped inside the packaging. This one is also taped to the jewel case itself.

Apparently there used to be a third, but a less-than-amused Chris Brown fan stomped on it in protest.

While we're not sure Chris Brown actually loves to hit women, it's hard to argue he doesn't have this sort of thing coming. The album pictured above is his most recent -- F.A.M.E. stands for Forgiving All My Enemies, which is not exactly the contrition you might hope for. It also was his first album to debut at number one on the Billboard 200. Well done, America.