The Nine Most Bizzare Moments In Juggalo History 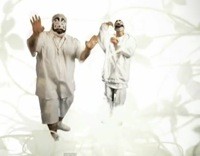 Last week, as they do once a year, fans of Detroit hip-hop duo Insane Clown Posse converged on Cave-in-Rock, Illinois (160 miles southeast of St. Louis) for the Gathering of the Juggalos. It's a time when fans of the band and their Psychopathic Records label mates convene for music, fellowship, enjoying nature, and ICPing it up.

Things tend to get a little out of hand. This year, the Juggalos were a bit rude (though not uncharacteristically so) to their master of ceremonies, Charlie Sheen, pelting him with crap. Which is pretty much what most of America has wanted to do since last spring. Bravo, Juggalos, for having the balls to do what everyone else hasn't had the guts to do. The Juggalo antics aren't always so cathartic, however.

9. A decade ago, they scared the fuck out of Bill O'Reilly by making some rather good points about child-rearing.

8. For the Juggalo who wants an athletic outlet for his anger, there's Juggalo Championship Wrestling. Which is totally real.

7. The parents and grandparents of the happy couple were so proud at this Juggalo wedding.

6. A preacher in Wichita, Kansas ministers to Juggalos, but doesn't explain how fucking magnets work. No word on if the three members of Westboro Baptist Church were picketing across the street.

5. Back in the good old days of really shitty talk shows, Jenny Jones explored the living conditions and hygiene habits of one Juggalo. 4. Juggalos love their Faygo. But who loves it the most?

3. Juggalos get mad when people fuck with their family, just like everyone.

2. They also hurt when they lose loved ones. The death of a child is a horrible tragedy. Especially when the child is laid to rest in ICP paraphernalia. Oh, and Mama wants her fucking t-shirts.

1. Remember a few years ago when a guy was beheaded by his seatmate on a Greyhound bus traveling across Canada? The victim was a Juggalo. His death had nothing to do with him being a Juggalo. Sometimes, the bad guys don't wear clown makeup.