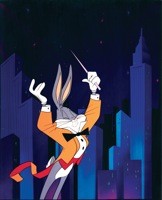 The St. Louis Symphony has announced a handful of new shows for its 2011-2012 Live at Powell series. They are unapologetically pop-centric, which is nothing new for this series or indeed for symphony orchestras nationwide. As it gets harder and harder to attract audiences to classical music, some of the world's best musicians are reduced to playing gussied up versions of three-chord pop songs. We get it.

Still, the programming is a little eye-popping. It's hard to believe some of these concerts are real, which is why we've invented a few of our own. Of the ten shows described below, five are actually going to happen at Powell Symphony Hall in 2012 and five are not. Can you tell the difference?

Music of Led Zeppelin: The St. Louis Symphony will be joined on stage by a rock band and vocalists as a full evening of Led Zeppelin classics including "Kashmir," "Black Dog" and "Immigrant Song."

Royal Ball: A tribute to Elvis Presley: The St. Louis Symphony takes you back to the hip-shaking heyday of rock 'n' roll with a symphonic re-imagining of some of the King's classic hits, including "All Shook Up," "Hound Dog" and "The Wonder Of You."

Bond and Beyond: 50 Years of 007: The St. Louis Symphony invites you to a shaken, not stirred evening featuring the music of James Bond. Selections from Goldfinger, Casino Royale and From Russia With Love will be included.

Homecoming: The St. Louis Symphony offers its take on some of the biggest hits covered on the television program Glee, maintaining the popular musical show's trademark pep. Members of the St. Louis Ballet will provide tastefully choreographed dance accompaniment.

Country Legends: In celebration of our nation's proud heritage of country music, the St. Louis Symphony Orchestra will put on its ten-gallon hat with a tribute to some of country's greatest stars. Finest fiddle section west of the Mississippi!

Surfin' Symphony: The Beach Boys' lush harmonies have never sounded so good. Take a trip to the Pacific with the St. Louis Symphony through all the hits: "Surfin' USA," "Surfer Girl," "Surfin' Safari" and more.

Sounds of New Orleans: A Tribute to Louis Armstrong: You'll truly know what it means to miss New Orleans after the St. Louis Symphony gives a loving tribute to a legendary musician who helped put the music of the Big Easy on the worldwide stage.

Answers on the next page. Music of Led Zeppelin: Real

Bond and Beyond: Real

Wayne Brady Sings the Sammys: Fake, but not completely -- this exact concert (right down to "improve artist extraordinaire") will be performed by the National Symphony Orchestra in Washington D.C.

Classical Music This Just In