The Five Most Extreme Moments in Black Metal Lore 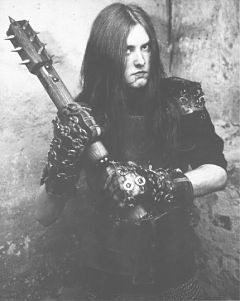 There is nothing more badass than black metal -- and, at times, nothing more terrifying. If you disagree with us, good luck next time you lose a bet with Satan. Heavy metal's more extreme, morbid cousin is shrouded in shrieks, corpsepaint, lyrics about the dark lord and a history of violence that rivals the combined plots of every Takashi Miike movie strung together. Decades, documentaries and many rock bios later, it's still tough to tell where the motivation came from, but it's even harder not to be in awe of its existence. In some cases, the badassery is still there, though the genre has occasionally been distilled into off-color references to Cannibal Corpse. In honor of black metal's intentionally fallen soldiers and the death anniversaries that hit us last week, we put together a list of some of the most extreme moments in black metal history. In the meantime: If you haven't, you should really just listen to some.

5. Black metal goes (semi-)mainstream In some ways, this is the scariest entry on this list. In the late 1990s and early 2000s, artists interested in black metal history and lore took to reappropriating the music through exploration in art, usually paintings. The results were largely overt, still images of the genre's most noteworthy names with black hair and corpsepainted faces peering out from images they would likely not appreciate being created. Projects like this remain contentious to this day, when the question has become: Each time we continue to explore the realities of death metal, are we maybe killing just a little bit of what's left of the first two waves? Decibel magazine ran into this problem to some small extent with their November 2010 "Black Metal Hall of Fame" special issue, in which the staff opted to leave out bands like Mayhem and Bathory rather than include them and be unable to talk to the entire original lineup. The stories grow more extreme, and maybe more irrelevant, as time passes. We'll try to stick to only the darkest moments and clearest facts for this post.

4. The aesthetic is cemented Black metal was spread both through its philosophy -- misanthropy and anti-Christian leanings and the revolutionary haze behind their combination -- and through live performances. The second category was predicated largely upon the value and height of the aesthetic that accompanied the genre, one grounded in pagan symbols (inverted crosses, pentagrams, misused crucifixions), violent imagery (animal heads, medieval weapons and blood -- either real or faux) and corpse paint (black and white makeup used for the exact point it sounds like.) But this was just background material, and the best live shows combined all of these elements and ran with them so far they fell off the face of reality. Take former Mayhem singer Per Ohlin, for example: The man, who is today suspected of having Cotard delusion, used to cut himself onstage, sure, but he also carried a dead crow around and smelled it before shows in order to add the scent of death to his live persona. According to some, Ohlin buried his clothes before shows, only to dig them up the next day for that perfect died-in feel.

3. Black metal and churches don't mix During black metal's healthiest (and most dangerous) years, the genre's followers played a role in burning down an estimated total of 50 churches, all between 1992 and 1996. The most notable ones were historically significant icons in the religious community, which were taken down early in attempts to spread the groups's pagan sentiments and anti-estabishment attitude while increasing the act's notoriety. The spooky chain of arson is today still the source of a rift between the remainder of the founders, some of whom consider the act legitimate and some of whom say it's embarrassing. Burzum think tank Varg Vikernes is credited with the destruction of one of the most important churches, Norway's Fantoft stave church, in 1992, and though he has frequently denied ties to Satanism, he did write this response: ""For each devastated graveyard, one heathen grave is avenged. For each ten churches burnt to ashes, one heathen hof is avenged. For each ten priests or freemasons assassinated, one heathen is avenged." He did not mince his words.

2. Varg Vikernes is incarcerated With great Satanic, anti-mainstream sentiments comes great responsibility, and the rising black metal community needed a de facto leader. For a time, this position was tensely filled by two Mayhem members, Øystein Aarseth ("Euronymous") and Varg Vikernes, who got along together about as well as you might predict two violently opposed radicals might. On August 10, 1993, Varg murdered Euronymous in what he maintains was self-defense. Worried about claims that Euronymous had bragged of his own plans to take down Varg, the guitarist confronted the band's co-founder and struck first. Although he still claims self-defense, Euronymous' body was later found riddled with twenty-three stab wounds. Combined with his four counts of church burning, Varg was sent to prison, where he served 15 years of his 21-year sentence. (Note: This time was complicated by an attempt to extend a prison leave by stealing a Volvo, which he filled with a rifle, a handgun, a gas mask, maps, camouflage clothes, a GPS, multiple knives and a fake passport.)

1. "Dead" dies On the frontier of the genre's '90s wave, few bands hit as heavily as Mayhem. The band's aesthetic followed a hardcore set of principles that were eventually carried to gruesome extreme by its singer's death. On April 8, 1991, the band's vocalist, Per Yngve "Pelle" Ohlin, known unironically by his nickname "Dead," killed himself in the house the band lived in together. Although he was found with both slit wrists and a shotgun blast through his brain, his suicide note included this apology: "Excuse all the blood, cheers" The rumor is that the remaining members ate part of his brain matter and made necklaces from pieces of Dead's skull, and though only the latter has been confirmed definitively, a photo of Dead's twice-killed corpse did wind up as the cover for the live album, Dawn of the Black Hearts. The image is here, and it's not safe for work (or dinner time, or small children, or much else).