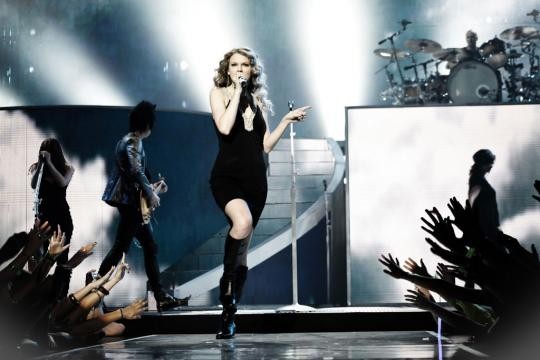 ​Taylor Swift is that skinny girl who's always whining about how fat she is.

She claims to be the nerd that you're likely to overlook. And she'll tell you she's the sweetheart who gets taken advantage of by Big, Bad Men ("Don't you think nineteen's too young/ To be played/ By your dark, twisted games," cries the poor movie-star-dating innocent). And, OMG, Kanye hurt her feelings so bad she had to write a song about how she forgave his sorry "Single Ladies"-loving ass! She's a perpetual pity party.

And that attitude, dear readers, is destroying America. It's not the only thing, mind you -- Washington, D.C., is a mess; the big investment banks cashed in during the boom and then got off scot-free; kids today just don't have an attention span. Etcetera, etcetera. But Ms. Swift's aura of professional victimhood is definitely contributing to our sad national decline.

Only in a music video could a five-foot-eleven-inch blond with naturally curly ringlets get away with claiming her romantic rival "wears short skirts; I wear T-shirts/ she's cheer captain and I'm on the bleachers"! Sure, she might have felt like an ugly duckling at one brief point in her otherwise sun-kissed life -- but it's time she quit whining and started admitting it: These days, Taylor Swift is America's cheer captain. She's not languishing on the fucking bleachers.

And beyond the disengenuousness of her poor-little-me pose, it's the sense of entitlement that galls. Take that cheer captain reference, which comes from the worst Taylor Swift song, "You Belong With Me." In it, she pretends she's the homely chick in the spectacles -- but if you actually parse out the lyrics, Li'l Taylor's trying to steal a dude from another girl because she's so convinced of her own superiority. She gets the guy's humor. She likes the songs he likes. Get out of her way, cheer captain!

It's the same thing with that aforementioned song about John Mayer. Dude's a notorious creep who completely threw down on Jessica Simpson's sexual, um, vigor to Rolling Stone. (Not cool!) Yet even after that, virginal Taylor was apparently stupid enough to hop into bed with him -- and then was utterly stunned that he was just not that into her.

Dear John
I see it all now that you're gone
Don't you think I was too young
To be messed with
The girl in the dress
Cried the whole way home
I should have known.

Yes, honey: You should have known. And once you got your clue, you should not have blamed the player for playing you. You should have reminded yourself that everyone warned  you about this guy -- stupid you! -- and then filed it away under live and learn.

And if for some reason you still had to write a song about it after processing all that, you should not have leaked the news to every tabloid in town that "Dear John" just might be a song about the odious Wonderland-admiring John Mayer. It doesn't matter if you "get" Mayer's sense of humor or like the music that he likes. He does not owe you anything, and you got dumped because you were stupid enough to believe otherwise. Own it!

And, for that matter, when you started dating Jake Gyllenhall, and it turned out that he wasn't really that into you, either, you didn't need to run to the same tabloids and cry your tale of woe. He didn't owe you anything, either.

You may be adored by a kazillion young girls who love your music, but that doesn't mean "this is how it ought to be," to quote your worst song ever, and that Prince Jake should sweep you off your feet and that you deserve to live happily ever after fairy-tale style (to quote another of your horrible songs). Or that it's time to pick out your silly matrimonial "white dress" just because you've decided some random crush should be your Romeo.

Tomorrow and Sunday, tens of thousands of young girls in Missouri will be rocking out to the music of Taylor Swift at Scottrade Center, singing along when she whines about Kanye and John Mayer and those horrible Mean Girl cheer captains. Blech! What's the takeway for those impressionable youths? You're entitled to love, so steal another girl's boyfriend. Trash talk anyone who refuses to be yours. And remain utterly convinced of your victimhood when your dream life isn't handed to you on a silver platter.

Sigh. The girls of America don't have a chance. Not that they should blame Taylor Swift or anything. That's what Taylor would do, after all. The rest of us would be better off owning it.
Read about why Taylor Swift is saving America here.