Jeff Tweedy's Family Band, The Raccoonists, Has Its First Single 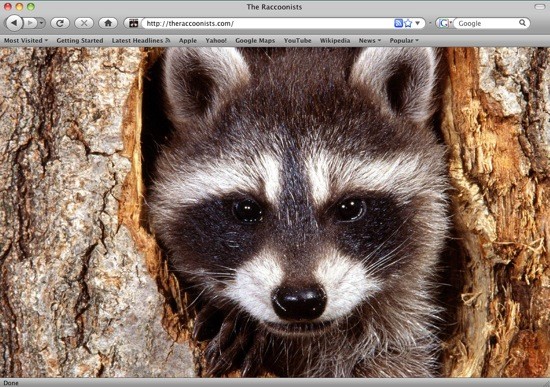 Jeff Tweedy has never been known for broadcasting his intentions. So it should come as no surprise that, if he were to start a band with his two sons, Spencer and Sam, they would release their first song as a b-side on a 7" collaboration project with Deerhoof.

That is exactly what has happened: The band is called the Raccoonists and the song is called "Own It." We're not sure that you could exactly say any of the Tweedys are doing that ("owning it") with this project -- there is very little information out there besides whispers about an upcoming album and a blank tumblr (pictured above). Listen to "Own It" and watch its lo-fi video below.

That video, incidentally, is unlisted, meaning you can't see it in searches -- you have to have the link directly (or the embed, obviously). The song was recorded in Sam and Spencer's bedroom. Spencer, you may recall, has a blog, where he posts things and takes amazingly well-aimed shots at Pitchfork.

Jeff will be in town on October 4th with Wilco, which is playing a sold out show at the Peabody. We doubt very much we'll see a Raccoonists tour any time soon. In fact, we wouldn't be totally shocked if this is more like a one-off thing, rumors or no.

The 7" is called Behold A Raccoon In The Darkness, and on its a-side Tweedy plays with Deerhoof in a rendition of "Behold A Marvel In The Darkness," originally on last year's Deerhoof Vs. Evil.