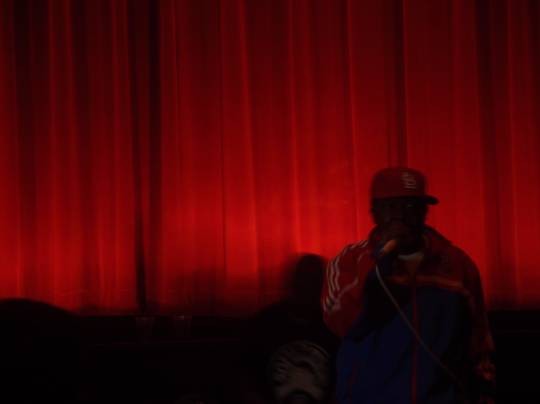 The crowd stood up and clapped when Phife Dawg strolled into theTivoli theater on Friday night. "Beats, Rhymes, and Life: The Travels of A Tribe Called Quest," had ended twenty minutes before, but more than fifty people were still in their seats, waiting for Phife, who was delayed by a missed flight connection.

With a red Cardinals fitted pulled down to his eye brows, he sat on a stool at the front of the dim room and took questions from the audience.

"St. Louis, this is like my forth home," he said into a microphone. "So I'm glad I could come out here, see if all y'all doing all right."

In a sense, it was the other way around. After taking in the St. Louis premier of Beats, Rhymes, and Life, which has garnered critical praise, the packed theater was now familiar with Phife's personal struggles: diabetes, kidney transplant, and, most notably, his insecurity of being the Tito to Q-Tip's Michael ("No disrespect to Tito," he said in the film). So the people were just as glad to see that Phife was doing all right. One guy asked him about his relationship with Q-Tip, which had been shaky throughout the film.

"That was filmed three years ago," he said. "We squashed that a while back. We're good now."

Of course, it wasn't sympathy that brought the crowd to its feet, but reverence. The film's narrative is driven by the growing tension between Phife and Tip over the years, but one of its themes is the artistic impact of A Tribe Called Quest. More than celebrate the group, the film, directed by Michael Rapaport, unveils the roots of their innovative style. From the moment Q-Tip first heard the record that would provide the drum loop for "Can I Kick It?" ("Oh shit!" said Tip, as he sat at his turntables reliving his Eureka moment), to the group's decision to wear Dashikis and African-patterned clothes in order to stand out, to Q-Tip's and Phife's uniquely complementary flows (the former's being laid back and poetic; the latter's being high-pitched and outrageous).

Tribe expanded hip-hop's paradigm for style and tone the same way Rakim expanded the paradigm for lyricism. They were self-aware and unpretentious and goofy in a genre defined by hardness and anger and bravado. They're the fathers of every backpack rapper and icons for every hip-hop head who prefers head-boppers to trunk-bangers.

Tribe represented a great evolution in hip-hop. The film suggests it might have been the last great evolution of the genre. One talking head in the film called the early '90s the Golden Age of Hip-Hop. And when another commentator said that the last truly monumental day in hip-hop was the day Tribe's Midnight Mauraders and Wu-Tang's 36 Chambers came out in 1993, a handful of patrons in the theatre went "That's right" or "Mmmmm-hhhmmm."

It doesn't matter if the early '90s actually were the golden age of the genre. The point is that Tribe's music is so timeless and induces such nostalgia that, at the very least, it feels like everything has gone to shit since then; feels like such revolutionary groups get no love from record labels and radio stations; feels like chart-topping hip-hop has grown homogenous.

So there was DJ Needles at the front of the theatre before the show, spinning Golden Age jams, as people in the crowd excitedly mouthed lyrics.

"Y'all treat us like we have the hottest record out," said Phife to the audience after the show, "and we ain't come out with an album in thirteen years!"