The Black Keys at Kanrocksas

The infield is packed with people too tired to stand. There's a throng by the stage, obviously, but the middle third of the place is strictly asses on the ground. We're getting to that point, toward the end of any festival, where the anticipation of the glut of music to come is gone. The rock and roll theme park packs up in a few hours and by tomorrow at this time we'll all be back in the real world.

But let's not jump past the Black Keys, a band gaining momentum at such a voracious rate it might not be lunacy to start calling it the latest in a proud, overblown tradition: The Saviors of Rock & Roll.

Let me explain: The only song you could even tangentially consider rock to appear in last year's Billboard top ten was Train's "Hey Soul Sister," which I hope we can all agree is a grave little factoid indeed. So we could use something to believe in, and why not Akron's heaviest?

Patrick Carney and Dan Auerbach - playing with three additional musicians in a somewhat new look - came out to a Wu-Tang sample and proceeded to muscle their way through a set heavy on last year's Brothers. They've gotten steadily less sloppy over the years - I don't necessarily mean that as a compliment.

Though it's all satisfying stuff. They have a no bullshit show, even at a festival. There's a giant inflatable wheel, sure, but they just play their songs. Carney doesn't address the crowd much, and when they finish their set, there's a concerted effort to get them back for an encore. They can't do it and won't , for sure, but it almost feels like it could happen. The chanting lasts for some six minutes, until they start playing Justice over the PA across the field at the Main Stage.

The stands have been open - they have a terrible view of every stage so I never thought to wander up. But it's fascinating, seeing the whole teaming thing in one eyeful. They've taken down SLIDErocksas, I see, and the hot air balloons. The Ferris Wheel is Technicolor. There's a glow from each concession stand and people are streaming across from Stagesaurus Rex to the Main Stage. It's impossible to resist the temptation to imagine this whole scene during a race. I never realized how huge these stadiums are, that a heavy-hitting music festival with tens of thousands of attendees could fit entirely inside the track.

I'm exhausted. You can read the rest of the weekend's coverage here - check back soon for much better photos and some perspective on all this. 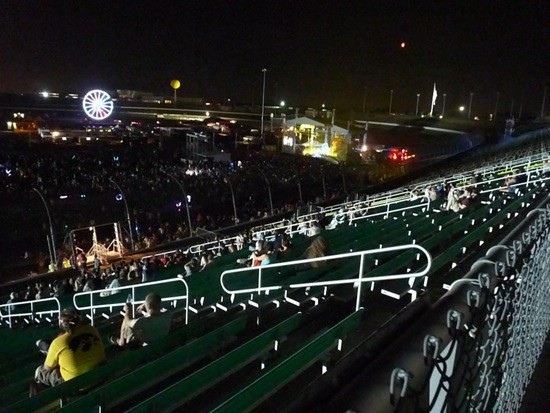