Grace Potter and the Nocturnals at Kanrocksas

The Nocturnals came out first, laying thud and polished grind. Grace Potter, who knows how to play a moment, came floating out, drawing out a dance around her band before taking up a microphone behind the keys.

There is no musical ground being broken, or even advanced, here. It's smooth riffs and thudding bass and bluesy rock and roll melodies and sex appeal. But this is exactly what you want at a music festival -- music you feel like you know already, even if you don't, music that doesn't require a nuanced mix or subtle mood shifts. You want colossally catchy rock and roll jams stretched to ten minutes and a breakdown where the entire band picks up a stick and starts mashing on the drum kit: 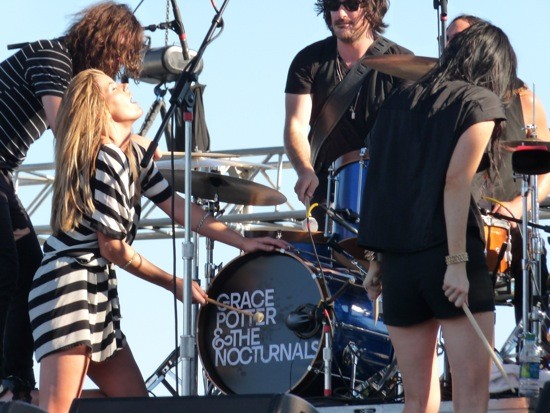 The song in question here, "Medicine," was the set closer and if you don't like it then there is nothing this band has to offer you. In addition to the drum breakdown, there were guitar solos, sing-alongs, false endings, Potter's awesome Janis Joplin wail, etc. She danced off like a Navajo and, moments later, came sprinting back for one more chorus and a group bow, which, again, was completely warranted.

In case you were curious, it is still seriously hot. Potter ditched her shawl and took the opportunity to lead a group chorus of "Hot In Herre" (Nelly alert!), emphasis on the clothes off part. She clarified, demanding a pair of panties be thrown on the stage by the end of the set. Not exactly the way Janis would've handled this situation, but it's definitely closer than whatever laser show Muse has planned.