And just like that the people came. Maybe it's that this moment now officially qualifies as the weekend or maybe it's that Kid Cudi is the first truly huge name on a bill that's held together by absolutely nothing if not huge names.

Cudi, who can occasionally be a moody disaster live, was in a sparkling mood: Smirking (by default) out at thousands of hands in the air, he tells us we have been great and that he'll come whenever we need him. "Put up a bat signal or some shit," he suggests.

His deep cuts, including a capella renditions of verses off A Kid Called Cudi, are met with the same rap-along fervor as the hits. Maybe that's what got him in such a good mood. Or maybe it's just that he's accepted his role: He closed, ten minutes late, with the hazy hit that made him hate being famous in the first place, "Pursuit of Happiness," while Primus started wailing across the infield. The hum died and the crowd migrated to Stagesaurus Rex (Primus is unique among this stage's performers in that you get the sense they might actually enjoy the concept of playing on something called "Stagesaurus Rex"). 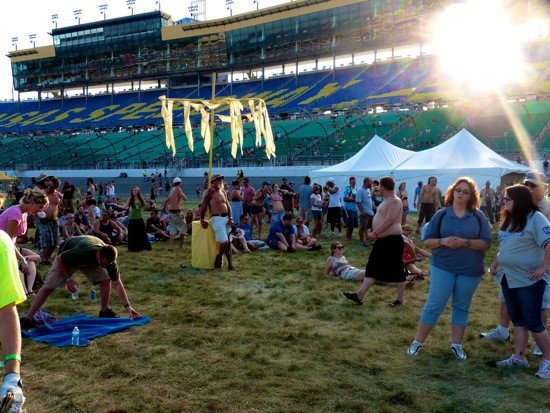 The festival was not particularly stingy with the press passes, for which we are incredibly grateful. But, oh wow, is there a crowd in this media center. Photographers are starting to complain about the crowds in the pit -- the one who went to Ellie Goulding over at the Ad Astra stage instead of Cudi says it was fine over there.

The sun has gone down behind the stands and there's a modest breeze -- the warm light does wonders for the vibe. This thing is starting to feel like a music festival.