It's Final: The Complete Lineup of An Under Cover Weekend 2011 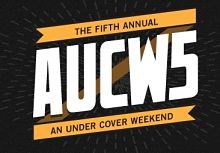 It's official. This morning's announcement that Union Tree Review will be covering Marvin Gaye at the fifth annual An Under Cover Weekend, completes this year's line-up of the two-day show series on Friday, September 9 and Saturday, September 10. The series finds some St. Louis groups paying tribute to a wide range of artists including AC/DC, ELO and Stevie Wonder. Some of the choices are surprising.

Read the full lineup after the jump:

Bo & the Locomotive's Bo Bulawsky, who will be performing as Cake this year, is a huge fan of the band he's tackling, as are his bandmates. The group is looking forward to performing music that is often, as they say, underappreciated.

"They are true early-indie-rock-country pioneers, but they often aren't seen that way," Bulawsky says. "I think if people watch a band that isn't Cake playing all Cake songs, it will highlight the fact that they are an actual great band."

Tickets for An Under Cover Weekend are on sale for night one and night two.

The Orbz as The Pixies from An Under Cover Weekend 2009.