Interview: Troubadour Dali's New Album (Out Tomorrow) Is Not About Dinosaurs 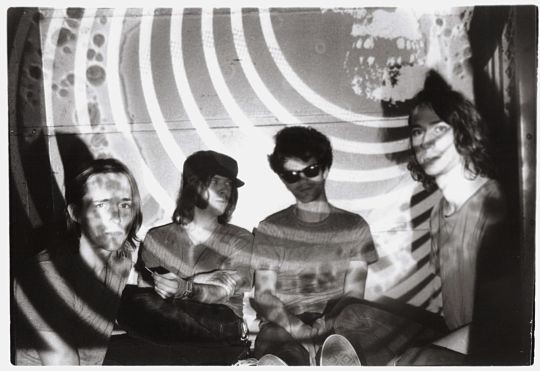 There is a pretty brazen vacuum somewhere in the room next to where two members of Troubadour Dali are conducting a three-way phone interview. It would appear that the shoegaze-y psych-pop band is never far from its noise roots, though this time it's more obnoxious than it is dreamy. For three years now, the local quartet has incorporated that noise into a sound that betrays shallowly buried influences such as Ride, Primal Scream and the almost unavoidable My Bloody Valentine allusion. We tracked down the band's Ben Hinn and Kevin Bachmann to discuss the group's second album, one they co-wrote, and the creative gestation that went into its official release tomorrow night at Off Broadway.

When the interview ended, it was clear both that the band's dynamic can be as cacophonous as its music -- and that the guys really like dinosaurs. And when we finished asking them questions, they turned a rather strange interview back on us. Read on for the sentiments that inspired the darker, wiser new album, but before you do, feel free to answer their questions yourself:

Kelsey Whipple: Tell us a little bit about the new album, Let's Make It Right. How does it depart from your debut?

Ben Hinn: We came into this album in a better space, which allowed us to actually get stuff done. That resulted in a much more focused-sounding album overall. It's tighter and crispier, very pop-y. It sounds weird, but we write the songs that just come out of us. We try to write music that we like to listen to, so as far as being conscious of our sound, we've grown a lot as people and as musicians since the last album. We were a little younger when we first started, and we were definitely into the music but also into having a good time. We've all personally delved into recording on our own, which has helped us get our ideas down better as a band and actually capture the sounds that we hear in our head. Kevin Bachmann: I think the melodies are a lot stronger this time. We didn't make any conscious decisions as far as goals for the new album, but it ended up more focused on melodies in a natural evolution.

Hinn: We tracked the majority of it at Sawhorse Studios, where we came in and recorded bass, guitar and drums together. After that, we added vocals and extra guitars and organs, which we did in our apartments and, you know, bomb shelters. Bachmann: The whole thing was conducted in various secret locations across St. Louis like parking garages and pigeon coops. I wish. We started working on it in the fall with just a couple songs, and that turned into an EP which turned into a decision to just record a full album. It was around September when we started, and we took some breaks. It wasn't just straight recording the entire time. Hinn: With the first album, the songs themselves were already so old. It was just a huge, huge learning process, and we made a lot of mistakes, things like, "This doesn't sound right, so let's redo it with this person instead of that person." In lieu of that, we learned a lot from the last album, things like what to do for the best sound and how to make things more efficient. This time we knew what we were doing, so it was a quicker, less painful experience. That being said, we did still learn a lot of things that we intend to use to improve our next album.

How would you describe the band's internal dynamic?

Bachmann: We're all best friends. Everyone in the group writes songs. This album ended up being Ben's songs and my songs, but that's just kind of the way it fell. We not only play together, but we do everything together. Hinn: It is very dynamic, that's for sure. We spend almost too much time together occasionally. We see each other all the time. Bachmann: We also like dinosaurs. A lot. They're prehistoric. They're extinct, but they used to rule the world. Hinn: They're mighty, and they have fallen. They transcend time.

It sounds like your next album should be a concept album about dinosaurs.

Bachmann: I've actually thought about that, and it would be awesome. Ben, let's make this happen. If you could recruit any famous musician to join the lineup of Troubadour Dali, whom would you choose?

Bachmann: I'd like Johnny Marr to join our group. He's already joined Modest Mouse after The Smiths, so maybe the chances would be greater that he'd join us, too. Hinn: I'd like Thurston Moore, but I'd be pretty intimidated. Beck would be rad, even though he's a Scientologist. He writes amazing songs, and I love his production. The Prickly Fingers of Sante Muerte by Troubadour Dali

Do you have a favorite song on the new album?

Bachmann: I like "Let's Make It Right." It just kind of sums things up in a really nice way. Hinn: I like "The Prickly Fingers of Santa Muerte." It's about death, but it's also a personal journey through the mind and the past by revisiting your ancestors. Bachmann: Are there any dinosaurs in there? Hinn: There are no dinosaurs, but at one point, it sounds like a stegosaurus stepped through a portal and into the song. So that's pretty cool.

What's the story behind the album title, Let's Make It Right?

Hinn: Well, we definitely wanted to make an album better than the last one, so there's that. Bachmann: We live in a different era now. Times are changing, and people are changing, and you always wonder if you're moving in the right direction. Are we moving forward, or are we moving backwards? It's a good time and a scary time at the same time. The album was written with that in mind. I always want to strive to be a better person, but it's not always easy.

You've been nominated as the best indie band in St. Louis at the RFT Music Awards for the past three years (and won the title in 2010). Is there a stigma associated with being labeled indie?

Bachmann: Oh, there definitely is. Everybody has to have a title. You have to call everything something. Hinn: People do like to categorize, and they need to fit things in boxes. We're not Pavement. We're not indie like that. We're only indie in the sense that we're independent of the mainstream, which is obviously a whole different beast than it has been in the past. We just write shit that we want to write. Bachmann: Whenever you're nominated as best indie band and you look through the people in the category, there's always so many different things going on there, which is amazing to see. Nobody's doing the same thing. Indie is kind of a blanket term, but the same couldbe said of just calling things rock and roll. St. Louis is a flourishing scene right now across all types of art, not just music, and it's a wonderful thing to be a part of.

What is the best thing about being a member of Troubadour Dali?

Hinn: I like being onstage and just creating righteous noise. Those are always my favorite moments. Bachmann: It's like riding a wave, not that I have done that or anything. I'm too pale for that. Hinn: I have, and it's an apt description.

What is the worst part?

Bachmann: It happens infrequently, but we are around each other enough to need to fight some things out every once in a while. We get along together more than not, but the point is that we don't always see eye to eye. Hinn: Most of us are pretty passive aggressive, so we just kind of sit and stare at each other and brood. And then we play music, and it's cool.

In the Studio Interviews