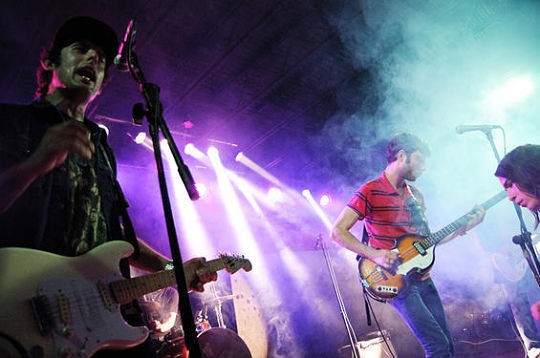 The Black Lips who appeared on the dark stage at the Firebird last night were, in a word, tame. Gone were the antics of mid-level indie-rock lore, replaced by an almost tired-looking band, a completely comfortable room temperature and a crowd that moved at the front and stood stoic in the back. The Georgia garage rock group's latest album, Arabia Mountain, has earned irrepressible media attention as the band's most accessible, if still balls-out, record in a long stream of crowd-clinching, fear-for-your-life rock 'n roll that is held together by a seemingly endless stream of live spots. Why then, was the band's show so hard to tap into last night?

A large part of it is reputation: Because the band tours so much and bases almost the entirety of its public props on bombastic live shows (the rumor that they urinate in each other's mouths simply will not die), there's a lot at stake at a Black Lips show. If it's a good show, what's on stake might be your life. The only thing the band is allowed to bring to the stage is the batshit craziness we've all come to know and fear. It's an easily understood if incredibly unfair expectation, and last night, it didn't hold true.

The band was immediately proceeded by a pitch-perfect opening accompaniment. After a raucous set from Flaming Death Trap, it was at times hard to tell that the band before Black Lips was not, in fact, the Athens rockers, and the effect was nothing if not a huge tease for the main act. The headliners walked in enthusiastically but without panache to begin their own set, which became a short tour through both fan favorites and their latest release. The setlist was expertly chosen, and the pacing added charisma to the band's short songs. Standing in front a giant white bed sheet with the band's name and two flowers spray-painted in its center, Black Lips seemed poised to destroy both the stage and their strangely twee decor.

Instead, they played a well-chosen but safe set that included the generally apeshit-inducing hits "Bad Kids," "O Katrina!" and "Hippie, Hippie, Hoorah." The guys jammed hard, and they introduced no verbal nonsense in between songs, opting instead to just ride the wave from one song immediately into the next. During the band's single verbose moment, guitarist Ian Saint Pé asked the crowd, "Who's going to Lollapalooza?" After some affirmation, he responded to a woman in the front row with, "Hey, guess what girl. So are we." The house was not packed, but those who came were fans who already knew this.

The night's sound quality suffered from overcharged guitar and drums over weak vocals, but the vibe suffered the most. It's regrettable to have to note that a lack of gimmicks weakened the show, but when your name is based on those gimmicks, your fans expect you to cash in on them. The guys didn't kiss each other onstage or ruin any of their instruments, both wise decisions that would normally fare them well. They didn't interact with the audience to any significant level, they didn't diverge from the setlist, and they didn't put extra effort into their brief encore. They did play a solid selection of songs that have intentions as strong as their length is short. They just didn't impress.