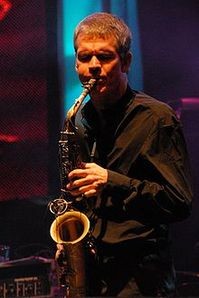 After more than 40 years in the music business, one might think that saxophonist David Sanborn has done it all. From playing at Woodstock with the Butterfield Blues Band, to performing on dozens of hit records with artists ranging from Stevie Wonder to David Bowie, to a successful solo career that has helped define contemporary fusion and funk, the Kirkwood native is one of the most recognizable instrumentalists on the planet, with a blues-drenched, razor-sharp tone on alto sax that has spawned legions of imitators.

This summer, though, Sanborn is trying something new and different - a tour with keyboard player George Duke and bassist Marcus Miller that will stop in St. Louis this Sunday at the Touhill Performing Arts Center. Billed collectively as DMS, the three decided to work together after an impromptu jam last year on a smooth jazz cruise presented by the St. Louis-based Jazz Cruises LLC. When Jazz Cruises head Michael Lazaroff suggested they team up for a series of shows and offered to sponsor a tour, it seemed like a natural fit to Sanborn.

"All three of us have operated in all different kinds of musical worlds," said Sanborn, "We all share a common sensibility in that we don't draw distinctions between kinds of music. It's all judged on its own merits."

"I grew up listening to pop music and R&B as well as jazz, and loved both," he continued. "Marcus is younger than me, so he grew up with the Jackson 5, and he was as affected by that as he was by jazz. And certainly George is like that - one of his early playing experiences was with Cannonball Adderly, who was a proponent of that kind of sensibility, crossing over, without being cynical or condescending about it." (Duke also played for several years with Frank Zappa, and has produced hit R&B recordings for singer Deniece Williams and others, while Miller produced several hits for the late Luther Vandross.)

Although this is the first time they've toured together, the three principals of DMS have a lot of shared history. For starters, Miller helped produce some of Sanborn's best-selling recordings, and also played bass in the saxophonist's road band for years. Duke and Sanborn first met in the 1970s and later recorded together on Sanborn's album As We Speak. In addition, both Duke and Miller worked on Sanborn's TV show Night Music (aka Sunday Night), with Miller serving as musical director for the first season and Duke taking on the same role in the program's second year.

Those shared experiences and musical values helped Sanborn, Duke and Miller reach a fairly swift consensus about what material to perform on the tour. "We had initial discussions about the general direction we were going to take," Sanborn said. "Then we each brought in six or seven songs, and we kind of went through them to put together a set of things that we thought not only would be representative of each of us, but also would represent some kind of collective attitude, and would flow together in a set in terms of continuity."

With support from drummer Louis Cato and second keyboard player Federico Gonzalez Pena, the resulting musical menu emphasizes funk and fusion, with Sanborn staples such as "Run For Cover" and "Chicago Song," as well as Miller's "Tutu" and Duke's "Backyard Ritual," both written originally for Miles Davis.

Though there's a basic template in place, Sanborn said they're trying to remain flexible as the tour progresses. "We generally start out in the same place - the first couple of tunes are usually the same, and then we can go anywhere," he said. "You try to get a sense of what you think is going to work on that particular night, and it's based on a lot of factors - how we perceive the audience, how we're feeling, the kind of place or hall it is, the acoustics of the room, what you think is going to work."

"I think the good thing about this situation is that we can develop stuff on the fly very quickly, and the way we approach the songs will change from night to night. We'll maybe stretch things, maybe change the feel up a little bit - that's the fun of it for us."