My Morning Jacket and Delta Spirit at the Pageant, 8/2/11: Review and Setlist 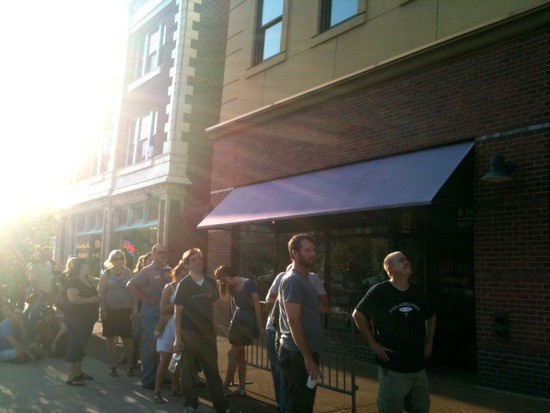 Considering it's been almost five years since My Morning Jacket played St. Louis, it's only fair that the band began the current leg of their tour to a sold out crowd at the Pageant. Even if it was on the hottest night of the year.

Opener Delta Spirit hasn't neglected St. Louis; it played the Firebird less than six weeks ago. Not that this caused the band to slack -- Delta played like it was headlining the show with a wild and raucous set. Lead singer Matthew Vasquez aims for Jim James' vocal range, and nearly succeeds, although his voice is more punk rock than James' ethereal falsetto. It has to be to keep up with his band's double drum onslaught. Sometimes that's not enough, so they whip out the trash can, banged with a tambourine.

In 45 minutes, the members of Delta Spirit owned the stage, earning a standing ovation before clearing their own gear and replying to fans on Twitter, having lathered the audience into a suitable frenzy.

My Morning Jacket entered in a green glow, reminiscent of the cover art for their most recent release, Circuital, slowing building with heavy bass into "Victory Dance" and "Circuital" -- the opening tracks of the new album. By "The Dark", from their 1999 debut, Jim James was stalking the stage, hunched at the waist, wild curls and navy blue jacket swinging as he bounced, heat be damned. All the musicians were as physically loose as the music was tight.

Before "I'm Amazed", James told of the band's love of St. Louis. "St. Louis is the center of the power universe," he said. "If people knew how much power was here, they might try to fuck it up and it's great the way it is." Through the song, he bounced across the stage, reaching his arms to acknowledge the furthest reaches of the audience.

James' voice might be the finest in rock music today. Clean, clear, and endlessly emotive, his only vocal stumble came during "Gideon," and it was barely noticeable. He sounded a bit weathered but lacking none of his emotional power for "Golden". Soft and quiet, he crooned with the sigh of the pedal steel guitar, his own acoustic playing restrained except in fiery bursts, begging to be unleashed but yielding to his high lonesome croon.

Guitarist Carl Broemel keeps up with James on harmonies with a lilting falsetto highlighted on "Slow Slow Tune", which settled the crowd into a deep, entrancing groove, the music polished without being over-rehearsed.

From there: The calm doesn't last. A dark and dire build-up leads to "Heartbreakin' Man", where a reggae-influence vibe disintegrates into howling guitars, sudden stops, psychedelic pedal effects that create a cacophonous swirl before slamming into pitch-black silence, a door slamming shut before a heavy guitar screech and James' soaring vocals on "Mahgeetah". He could climb to the roof on the strength of one sustained note.

A guitar tease does its job, opening an extended run of songs starting with "You Wanna Freak Out", that blend together. Too often this relegates My Morning Jacket into the realm of jam bands. Jam bands aren't this orchestrated, able to shake the balcony with shuddering restarts, bringing a full-on breakdown of sound that would be a fine ending to a show. But not at 10:30.

For the next forty-five minutes, the band culled its catalog to create a symphony that was nightmare one minute and a plush dream the next with "Movin' Away," a lilting piano waltz that left James perched on a monitor, plaintively addressing his audience, ending with a pristine note before the storm swung into full gear.

The block continued with a primal beat, extended and sustained, that morphed into James screaming through a face full of hair and guitar blasts that feel like a storm, complete with flashing white light and roars and groans, turning into an agonized beast ("Run Thru") before developing into electronic chirps that blip into "Touch Me, I'm Going to Scream, Part Two", with its soaring falsetto harmonies and pounding undercurrent below the blips. Then, the climax and ending action of "Dondante", which ends with breath from Broemel's saxophone before falling into feedback's white noise.

These aren't aimless jams of the "look what I can do with my guitar for ten minutes" variety. It's "listen to the story we can weave as a band." This storytelling tradition is what makes them a "Southern" band far more than their sound and subjects.

The encore started with the climb of "Wordless Chorus" before again emptying suddenly into pitch-dark silence. Then the melodic bounce of "Touch Me, I'm Going to Scream, Part One," which also slams shut at the end.

After the new "The Day is Coming", James told a story about going through a door in a St. Louis skate park and finding himself trapped in a tiny space (at the City Museum, perhaps?). The incident, he said, inspired "Holdin' On To Black Metal", which the band proceeded to rip to metallic shreds before inspiring an full audience dance party with "Anytime" and "One Big Holiday", running cymbals and pounding drums that explode into the closest thing My Morning Jacket does to a classic southern rock guitar homage, before dissolving into Tom Blankenship's most simple, primal bass line: a heartbeat rhythm that gets completed shredded to end the night.

Personal Bias "It Still Moves" was one of my favorite albums of the 2000s, but I've had trouble embracing the band's other works. Probably because I hadn't seen the live show before last night.

"I flew out to see them with Black Keys opening and it was the best show ever! I videoed it and was so drunk you can hear me going, 'Wooooooo!'"

"We went to Kings of Leon when they got shit on. That was so weak. Did you hear about that? Good music. D-bags. These guys would never do that."