The Chitlin' Circuit and the Road to Rock 'n' Roll: An Interview With Author Preston Lauterbach 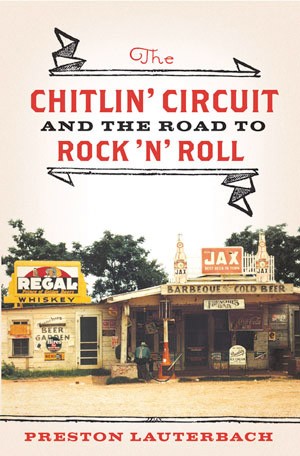 The story of American popular music is forever being told and yet there's always more to tell. Just published by W.W. Norton, The Chitlin' Circuit and the Road to Rock 'n' Roll, written by Preston Lauterbach, traces, in precise and dirty detail, the shadowy history of financiers, club owners, promoters and band leaders who participated in the loose network of juke joints, ballrooms and "nighteries" that once stretched across the South and up into the Midwest - giving rise to the music we know today as rhythm & blues, soul and rock & roll.

I reached Lauterbach at his home in Memphis as he prepared for a book tour that will bring him to St. Louis and Left Bank Books for a reading on August 4.

Roy Kasten: At the end of the introduction you write: "It begins not with an old song, but a lost world." The "it" is the story you're going to tell, but it's also something more. Rock & roll itself, but maybe even something more than that.

Preston Lauterbach: When I started, I didn't know what was there. I thought it was a music story that musicians would be telling me. But the deeper I got into it, the more sources I found, the more research I did, I discovered that it was more than just music and what happened in the studio or on stage. It was a whole world that doesn't exist now as it did then.

The key operatives were not the musicians, but the financiers. Those were the cornerstones of this world -- Beale Street in Memphis, Rampart in New Orleans. Without their enterprises, their vice enterprises, creating so much cash -- that was just the way it worked. Vice, kingpins, cash, nightclubs and music -- that was the way it went. It wasn't just music, it was a whole culture. The music spun out of the culture. The way it would be reflected in rock & roll lyrics, for example. The sex, violence, booze, the fun that happened on what they call "the stroll," infected pop lyrics and brought the rock & roll atmosphere to the songs.

And it was more than just language. The images emanated from real places.

Especially when looking at archival documents, it was so much fun to see this world come alive to me and thrive on the page.

You're really looking at the changes from pre-war to post-war America, especially black America, and one might not want to separate that out...

But it really was separate. It functioned in a stand-alone, separate fashion. That becomes the foundation of rock & roll as black music spread. There wasn't a lot of shared anything across race lines at that point. Mass culture was divided, with some exceptions. Bands like Duke Ellington did cross over to the white audience. But black pop was its own separate thing, had its own background, players and audience. That was just reality at that time.

You're also intent on telling the stories through the experiences of these forgotten figures, these "operatives" as you call them. People will recognize names like Don Robey, but less well-known figures, like Denver Ferguson, become, I hate to use the cliché, larger than life figures.

No question about it. He wanted to be larger than life. He'd be happy to hear you say that. Bottom line with him, [Denver Ferguson] started the very first national black talent agency. He was black, his account executives were black, the acts he's booking, the promoters, club owners, the audience out on the road, virtually all black. There were a few white promoters, but it was this whole black shadow world. You know Thomas Edison and Alexander Graham Bell are credited as inventors of the light bulb and telephone, as if they came up with these things out of thin air. That's not real. They built on other people's innovations and made them work better than before. That's what Denver did with the circuit.

He really energized small southern towns that didn't have a venue. Some didn't even have a nightclub. He made promoters. He understood how the black world functioned, how black economic activity all centered on one street because of segregation. Everybody socialized, came through the barbershops and beauty shops, the taverns. He took those people, whether barbers or beauticians or bartenders and made them promoters. He taught them how to put the placards up when the band was coming to town, how to pay the bands and how to pay him. He really grew this circuit of shadow promoters. He didn't like paying his taxes. I think he had an issue with supporting a government that wasn't supporting him.

Essentially he invented the street team.

Yeah, right. His background was in numbers racketeering. He worked the black enclave in Indianapolis around Indiana Avenue. His whole scam was street lottery, played exactly like you'd play PowerBall or Pick Six today. That's what made him wealthy. In order to work that racket he needed a street team. I guess they had a more fancy term, "policy agents," and they'd work the street corners and make themselves available without pestering people. They'd take people's bets, bring the money back to Ferguson and keep their percentage. He projected that system throughout the south.

What did what's commonly called "urban renewal," and what you rightly call "decentralization," mean for the circuit and its performers?

The circuit was built through what they called "the stroll," the black main street through town. So all the black economic activity was centralized on the stroll. That lent a real elegance to the system. Everything was so concentrated around places like the Beale Street district. It was easy to get the word out about social activity, through advertising and marketing.

Urban renewal really began in the late '40s, between the Interstate and Housing Acts, which led to the construction of the highway and freeway system during the Eisenhower administration, and the construction of greater public housing in the cities. The federal government and local governments, through eminent domain, often bulldozed these black communities, like Indiana Avenue where Denver Ferguson worked. During his time it was vibrant, culturally and economically. There were restaurants, cafes and nightclubs, and the black newspaper was located on that strip. All these structures, and residences as well, were bulldozed and, in Indianapolis, replaced with parking lots. In Houston the stroll was replaced with an off ramp. Beale Street, the stroll was replaced with white-run tourist attractions.

What that did was to harm the simplicity of the circuit. It moved black economic activity to the margins, to the ghetto, really. That was the rise of the ghetto. There were still nightclubs, but it didn't operate as smoothly. The other thing that undercut the circuit was integration. During that time, a lot of black people in the cities didn't want anything to do with those places. They were looking to the future, wanting to get out, to see and go to places they couldn't before. A lot of the people I interviewed romanticize that time before integration. The communities were whole. They feel like now that the elite black communities blend into the mainstream and leave ghetto blacks behind without strong leadership or economic opportunities.

What was the most difficult part of your research?

Establishing a beginning point to the story -- simply because it didn't exist. If I was writing a book about the Civil War I would know it would start in 1861 or if I was writing a biography of JFK it would start around 1917 when he was born. In this story there was no birth date or obvious pre-history. It took years of research just to establish where the beginning point was. After that happened, everything fell together nicely. All of the kingpins and characters, they overlapped in real life, they all worked together and knew each other, so it was pretty easy in a narrative sense to put the story together once I figured out how it began. I could move the focus from Walter Barnes to Denver Ferguson to Don Robey to Sunbeam Mitchell to Clint Brantley, from kingpin to kingpin, as they rode high, as they developed important artists.

As a white man, going into the places and interviewing in the Deep South, did you feel race inhibited your access in anyway?

No. Everybody wanted to talk. They lived it, they know it's an important story and they saw an opportunity to get an obscure piece of history out there. There was just one person who wouldn't talk to me who is still involved with the business. So he had his reasons. Nobody ever said, "White boy, get off my lawn." I also show up prepared. I go in with a specific focus. Here's one: I interviewed B.B. King. He couldn't be more bored with having to do another interview. But when I asked him about Milton Barnes, who ran the Hi-Hat Club in Hattiesburg, Mississippi, he really perked up. That's not the usual question about playing with Eric Clapton. I saw the warm, gregarious B.B. that he can turn on when he wants to. So, no, race was not a problem, at least not on my end. People were very forthcoming with sensitive details about some of the criminal operations behind this. People trusted that I would do right by the story and wasn't just an asshole who was asking questions and didn't know any better.

The story has a narrative contour to it, but it's not a this-happened and then-happened story. And it's not a Wikipedia overview of every club and every musician on the circuit.

It would have been very hard on me and on readers if I took that approach. If I raise awareness of the circuit it could lead to other things. Someone in St. Louis could look into it and bring a whole new series of characters that have been overlooked to life.