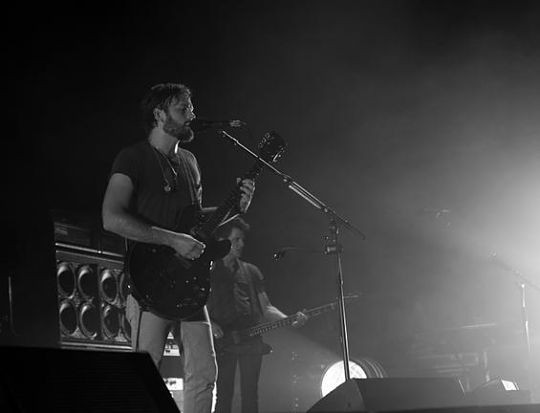 The day has come. A little more than a year ago, Kings of Leon aborted its concert at the Verizon Wireless Amphitheater after just three songs, claiming, in an incident forever to be mocked as "pigeon gate," that birds had shat relentlessly upon bassist Jared Followill. Despite the obvious conclusion drawn by members of the audience -- that the band's members were a bunch of wusses to be scared of a little pigeon poop, or worse, drunk and looking for an excuse to exit the gig -- the band found its share of defenders. Conditions on stage were called "disgusting" and "a toxic health hazard."

Today, St. Louis can officially consider itself vindicated. Today's news that the southern garage rock band has canceled its entire U.S. tour because of "vocal issues and exhaustion," after jettisoning a gig in Dallas after just 40 minutes of play, marks the final tally mark against the band.

To put it clearly: While we thought their complaints of pigeonshit were pretty bullshit, it turns out the band is just chickenshit -- and maybe, also, full of shit.

Our sister publication, the Dallas Observer, covered all the eerily similar details of the band's recent onstage debacle in Texas. The Kings of Leon left the stage after leader Caleb Followill complained of feeling ill and delivered this poem to the crowd: "I'm going to go backstage and vomit and then play three more songs."

Different brother this time around? Sure. Same story? Definitely. A year later, it looks like the real problem has nothing to do with St. Louis.

Although his brother Jared and cousin Matthew returned to the stage in Dallas to apologize, the full band never did -- an unhappy ending that then stirred a fairly cryptic set of tweets from various band members. Bassist Jared spoke out against his older brother and the band's immediate future on Twitter with the message, "I love our fans so much. I know you guys aren't stupid. I can't lie. There are problems in our band bigger than not drinking enough Gatorade."

While we wish the band the best of luck with the obvious underlying issues and their physical health, we can't help but point out that this behavior takes its toll on music lovers, who arrange their schedules, fight traffic and wrangle parking, just to get, shall we say, shat upon by the band they came to see. No wonder fans take these things personally.

We'll stay on this story as it plays out. In the mean time, let's relive St. Louis' righteous anger at Kings of Leon after last year's aborted show through these four comments, which appeared on the music blog's original post, which made it to the top ten list of the year's total blog comments:

4. "This makes Courtney Love's recent show look polished and professional. Except she wouldn't have quit if a pigeon shat on her. She would have sued it." -- Robin, via the Internet

3. "Iggy Pop woulda climbed to the rafters, grabbed the bird and took a shit on it. God, rock stars are such pussies nowadays." --Anonymous, via the Internet

2."If this would have happened at a Ted Nugent show he would have whipped out a .44 magnum or shotgun and started kickin' some pigeon ass! Problem solved. BTW Chuck Norris wouldn't tolerant this behavior either. He would have shit upwards on the pigeons." -- Double T, via the Internet

1. "Is this what passes for rock'n'roll among today's youth? For shame. The late great Lux Interior would have SNORTED the goddamn pigeon shit and kept performing." -- Realist, via the Internet

UPDATE: US Weekly is reporting that bandmates are trying to push lead singer Caleb Followill into rehab. Sounds like a good idea to us.