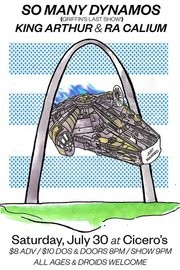 It's almost all about the locals this week, with Spelling Bee kicking off its tour tonight at Pig Slop and a Saturday night on which we really wish we could clone ourselves: Griffin Kay's last show with So Many Dynamos, Jason Torbitzky's last show with Theodore at the Union Electric 7" release, Glass Teeth's last show ever and Bo & the Locomotive and Union Tree Review's joint album release. Embarrassment of riches doesn't even come close.

For those looking for a bit of touring band action: The Safes bring the hooks to the Firebird tonight, Colourmusic brings the weird to Off Broadway tomorrow and Spoken Nerd drops knowledge at the Tap Room.

Spelling Bee Tour Kickoff Pig Slog Studios With Ugh, God, Fat History Month, High In One Eye, Fragile Farm and Escalade 7 p.m. | Donations The subject of this week's feature, Spelling Bee has led the St. Louis DIY community by example in the short years since its inception. This show marks the beginning of the gleefully experimental band's sixth tour.

The Safes The Firebird With Left Arm, Thee Fine Lines and the Roundheels 9 p.m. | $8 Chicago power-pop outfit the Safes comes to St. Louis -- the grooves run deep and there are enough surprising turns in the band's music to make things interesting.

So Many Dynamos: Griffin's Last Show Cicero's With Ra Cailum and King Arthur 8 p.m. | $8 to $10 Guitarist Griffin Kay is moving to Boulder with his wife -- we are happy for him and sad for us."When [Griffin] gets inspired, his entire body reacts with an infamously wild nervousness that conducts enough energy to light a smile on anyone's face," says bandmate Clayton Kunstel.

Bo & the Locomotive and Union Tree Review Joint Release Show The Firebird With Oil Boom and Pretty Little Empire 9 p.m. | $10 Two of the most interesting up-and-comers will share a party to their respective debut full-lengths. Creativity is in seemingly infinite supply for both bands -- on an impossibly crowded night in St. Louis music, rest assured this one will hold its own and then some.

Glass Teeth's Farewell Show Heavy Anchor With Spelling Bee, Doom Town and Shaved Women Glass Teeth never really hit a stride, except for possibly right now at the end. Matty Coonfield thinks the album he and the band will release for its farewell show is a good 'un, and trust us when we say he isn't prone to baseless self-promotion. Some of the best of the city's experimental and punk scene will be on hand to pay some respects.

Colourmusic Off Broadway With Morning Teleportation 8:30 p.m. | $10 In case you're still looking for something to do after all the rest of this: Colourmusic brings its deeply-damaged rock to Off Broadway for a night of color theory, noise and the kind of eccentric exuberance we've come to expect out of bands from Oklahoma.

Ticketmaster New Music Spotlight The Pageant With the Orbz, Connibal Road, Make Me Break Me and Sing Me A Fiction 7 p.m. | Free Another local takeover of the big stage -- the vibe can occasionally be strange but the rare chance to hear these bands plugged into the massive sound system is always worth a peek.