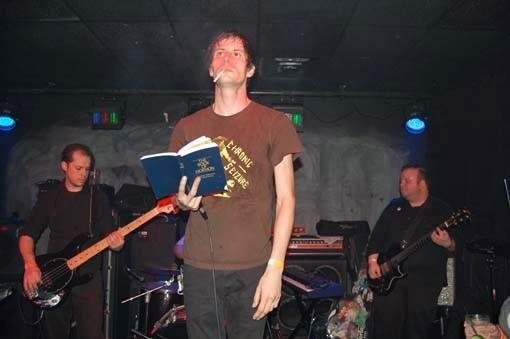 Tomorrow night, there are no fewer than four major local shows vying for your weekend attention. Two of them are sad occasions -- Dynabro Griffin Kay's final performance with So Many Dynamos, Glass Teeth's final show as the five-man powerhouse you've come to know and loathe -- and two of them are happy ones: Union Tree Review and Bo and the Locomotive have a joint release show at the Firebird, and Union Electric's dropping its new seven-inch knowledge at Mangia Italiano. Pick your poison St. Louis, or make like we will and try to hit them all.

We caught up with Glass Teeth's Matty Coonfield for a final Q&A about the band's last performance. It's also releasing an album at the final show, the last one recorded before deciding to call it quits. Get a sneak peek with "Work Party" below. It's not the end for Coonfield, inimitable lead singer Jeff Robtoy, or even Mark Early -- you can catch the three of them playing in Tone Rodent. But until the inevitable reunion, this is your last chance to see them with Lorne Day on bass and Mike Hansen on drums. Coonfield says to expect a pre-taped eulogy, plenty of special guests and killer sets from Doom Town, Spelling Bee and Shaved Women.

Diana Benanti: What can we expect from the final show? Bloodletting? Tears? Silly string?

What are you going to miss most about playing with this particular group of people?

The look of indignation on the faces of people who paid good money to see something that they hoped they would like.

Tell us about the new record.

Well, It is free! it's got eleven songs. It's on CD, because we are poor. And, sort of, we finally figured it out... like, now that we are done we actually recorded a good record... I guess that's just par for the course.

Why is it important for Doom Town, Shaved Women and Spelling Bee on the bill?

Well Doom Town have all been our buddies forever, and one day while talking to Ashley (from Doom Town and Tone Rodent) we realized that we had never played a show together so we figured this would probably be as good a time as any. Shaved Women are our buds and they are radical, so we wanted them to play and the kids like 'em! As for Spelling Bee, we have recently released a 7" with them, and we have probably played with them more than any other band, so it just seemed appropriate. I was really bummed that BFAS couldn't play, they had played with us at our first show, but unfortunately there were some scheduling issues, so what can you do?

Tell us one thing about Mark Early that he wouldn't want us to know.

He has an unhealthy love of caveman movies.

Where and when can we hear the new Tone Rodent material?

Soon, we just finished mixing it last week. We are talking about trying a Kickstarter thing to help get it paid for...so probably a couple of months before we are finally holding a vinyl record in our hands...But, I will tell you it is super heavy! And we are all excited about it!

Are there any bands in St. Louis right now that you feel are capable of following in your footsteps?

Capabilities aren't the issue. Really there are four easy steps for any band that wants to follow in our footsteps:

What else should we know about this truly unfortunate occasion/totally dope night of music?

The other night I received on CD a eulogy for Glass Teeth from local celebrity/pancake man Mustard Rob! And I am not allowed to hear it until the show! Rob was going to do it in person, but he is on tour! SO we are going to play that before our set! So that should be interesting. As for other things happening that night (note: guests are subject to change without notice) we have a lot of special guests lined up.: