Band Of Heathens And Theodore At Off Broadway, 7/27/11

On another muggy Wednesday in St. Louis, Band of Heathens brought towering piles of equipment and merch and Theodore brought its two new members.

The shakeup in Theodore: Drummer Jason Torbitzky got a job he couldn't share with his duties as a member of a band that tours. He'll play a final show with the band on Saturday at the Union Electric's 7" release. Matt Pace, of Rats & People Motion Picture Orchestra, joined the group for its most recent tour and is now playing Wurlitzer with Theodore. Sam Meyer, of Magic City, is the new drummer.

This was show number two for this lineup, so it's way too soon to start guessing at how this will all shake out. Last night's set was fun: alive and noisy and deeply-felt. Much of Band of Heathens' older crowd took shelter in the back of upstairs. Theodore rode Blood Sign's "Engine No. 9" as fast as possible into the sticky night.

Let's revisit Band Of Heathens' piles: At least three guitars for each of the three guitarists, a similar abundance of keys and amps, etc. And the booth in the back was rendered a cave of cozies and hats and t-shirts, your physical media of choice, not an an inch uncovered. This, then, is not a band that's much into minimalism. It started as three bands, actually, and there are still three songwriters -- Colin Brooks, Ed Jurdi and Gordy Quist -- the offshoot is a wide range of what we'll shrug off as Americana: Southern rock jamz, twangy acoustic numbers and hushed folk among them. There were some moments of genuine warmth. A healthy contingent made its way to Off Broadway, enthusiastically cheering each solo and hanging on every word of banter. Fun fact: Band Of Heathens was originally called the Good Time Supper Club. 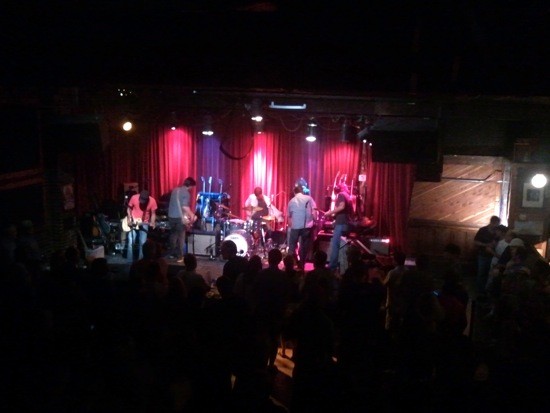