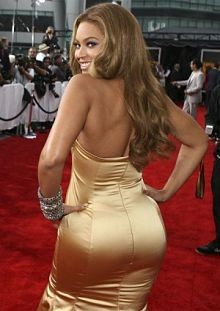 When was the last time you heard someone say they were "gettin' jiggy with it" (and didn't slap them)? The answer is probably not recently enough. In honor of the woman we saw invoking the word "Bootylicious" on the back of her tiny shorts this weekend, we have broken down a few of the inexplicable words that briefly, gloriously and awkwardly entered the lexicon. Because if the world needs more of anything, it's dated, ambiguously sexual '90s lingo. Feel free to bring up your (maybe least) favorites in the comments.

8. Bootylicious Heard in: "Bootylicious" by Destiny's Child Part of speech: Adjective Take one look at Beyonce, that sassy-gorgeous R&B vixen who was a solo artist even when she wasn't, and you will remember why this word had a brief moment of awesome. We could tell you her ass is to die for, which it is, but the fact that there was a song created with the sole purpose of bragging about it while simultaneously teasing a dude who couldn't handle her is evidence enough. Although the idea that it's possible to be too bootylicious is one we don't agree with, we're glad there's a word outside of the jargon in "Baby's Got Back" to describe this natural miracle.

7. De-lovely Heard in: "It's De-Lovely" by Cole Porter Part of speech: Adjective Fuck the thesaurus. When delightful and delicious simply won't cut it, you have a third option that means basically the same thing as many similar and real adjectives but sounds that much cooler. It's like you're breaking the rules while still being very polite and complimentary. It's the rebel descriptor, an adjective without a cause, if you will, because you could, let's be real, just say "lovely."

6. Fergalicious Heard in: "Fergalicious" by Fergie Part of speech: Adjective We hear that Fergie's spirit inhabits your body for a slight second every time you invoke the diva's (fake) name. It could also mean many things, so pay careful attention to how we use it in the following examples. "Hey, Jill, those fur ankle boots go great with your swimsuit. Totally Fergalicious." "John, I think your fearless willingness to urinate onstage during your black metal show is really Fergalicious." "Cindy, what's up with all these Seinfeld re-runs? So not Fergalicious." This is basically a hyper-specific and yet somehow more vague version of the previous two words.

5. Californication Heard in: "Californication" by Red Hot Chili Peppers Part of speech: Noun This one has limited applications, we admit, but that doesn't detract from its awesomeness. We're not sure if an act actually has to have occurred in California to apply here, but we're going to let the rules slide and interpret this one as anything that could have happened in California or does happen there on a regular basis. It's something to dream of, though, so the real point here is not to use it lightly. 4. Whoomp Heard in: "Whoomp! (There It Is)" by Tag Team Part of speech: Interjection Because we don't have nearly enough onomatopoeia as it is, we could really use a retro throwback option to replace the "Yikes!" and "Jinkies!" we've been running into the ground lately. "Whoomp!" comes with lots of options, so feel free to use it when you are bitten by a shark, witness a truly Bootylicious man or woman, forget to take a shower, eat a particularly tasty sandwich, knit a tasteful Christmas sweater, accidentally encounter an ostrich or play a part in some sort of Californication.

3. Wonderwall Heard in: "Wonderwall" by Oasis Part of speech: Noun Use this one with caution. You only get one wonderwall in your lifetime, so don't squander it on someone who isn't worth it (or won't get it). The modern definition was created by the band's leader and songwriter, Noel Gallagher, who wrote the song for his now ex-wife, Meg Matthews. If he ever drops the word or attempts to sing it around his current wife, she has our full permission to retaliate. Whoomp!

2. Jiggy Heard in: "Gettin' Jiggy Wit It" Part of speech: Adjective This word has the unfortunate connotation that comes with '90s Phat Farm shirts and the general ickiness that was Will Smith's rap career, but let's break it down one step further. Gettin' (never getting) "jiggy" can simply mean hanging loose, being a pretty fly individual or maybe, again, playing a role in a scene of Californication. If you do all of these things at once, you might actually have taken things to the next level -- and the next word.

1. Sexyback Heard in: "Sexyback" by Justin Timberlake Part of speech: ??? The way it's repeated in Justin's beautiful pop prose, you might think "sexyback" sounds like two words in a traditional verb and object combination. That's where you're wrong. (Whoomp!) It's status as a spaceless single word elevates sexyback to genius level while making it almost impossible to use without being prefaced by a pronoun and the word bringing. Things get even trickier from there. Justin technically already brought sexyback with a song literally titled "Sexyback," so is there room for any of us to do the same or even use the word anymore? Do we care?