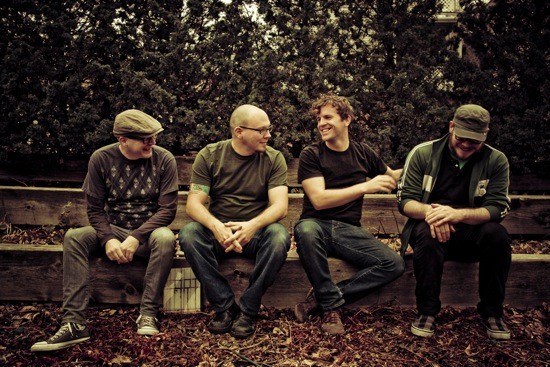 Josh Caterer, lead singer and one of the three Caterer brothers in the four-piece Smoking Popes, was compared to his grandparents' crooners while he wrote torch songs like "Need You Around" in his early twenties and sang about fatherhood and adulthood on 2008's Stay Down, the band's first album following a six-year-long breakup. In 2011 he completes the reverse-aging process; the band is touring the country in support of This Is Only A Test, a concept album about a suburban teenager and would-be punk whose girlfriend, when he finally snares one, can't understand that he only wants to be like Iggy Pop.

The Popes play tomorrow at 8:30 at the Firebird. While the Popes toured the West Coast with fellow Chicagoans the Alkaline Trio, Josh talked with us about not wanting to go to college, concept albums, and the crooner analogy of his dreams.

Dan Moore: Was This Is Only A Test your first attempt at a concept album?

Josh Caterer: Yes. It totally came to me--it occurred to me that I had never really written songs from an explicitly teenage point of view, and that it would be kind of funny for me to do that now that I'm in my thirties. But before I dismissed the idea as being too ridiculous I started getting all these song concepts bubbling to the surface. Before I knew it, I had written the first five songs of the album, in five days, and I just decided to ride the wave.

When you wrote songs before were you assuming an identity like you do here, or working more from your position as the songwriter?

You had a narrator who was explicitly not you.

Right. Even though all the songs were in the first person I was still adopting or trying to give voice to a character who was not even supposed to be me at all. Which was a lot of a fun to do...

Once I had a defined topic it was easier to know what blanks to fill in, because I knew where the borders of the box were--where normally when I'm writing a song I have to spend some time thinking, 'Okay, what in the world do I want to write about? What do I want to say?'

Once I came up with the concept here I knew all the things that I wanted to say. Right away I was like, "I should write a song about mono, that would be pretty funny." Or, "I'll write something where I don't want to go to college, that's something this character would say."

Your setlists always include songs from throughout your twenty years as a band. When you come back to the old ones are they different?

For the most part we're not trying to reinvent the songs, we're just trying to deliver them with some energy and some passion... It's not so much remembering who I was as finding a way to connect with the lyrics as the person that I am now. Sometimes it feels a little different to be saying something when you're in your thirties than it was when you were nineteen.

But you know, a lot of things are universal and they still apply--or sometimes a song kind of becomes like an old friend, and when you sing it it's more like you're acknowledging this communal experience that happens between you and the audience, because they're singing along and the song has had significance for them, obviously. So you're all just kind of celebrating that.

You've toured extensively behind This Is Only A Test, and you have a new website, a new label, a video for "Punk Band." Did you learn anything from releasing your first comeback album that changed how you approached this one?

Yeah. We didn't tour enough for Stay Down. I had scheduling restrictions because of a job I was attempting to keep at that time, and I wasn't willing to take the plunge and make the necessary adjustments in my life so I could tour more. I figured a few weeks of touring would be enough, and it wasn't.

And the label that put that album out ended up folding within months of our release, so that wasn't a great situation. Working with Asian Man is great--Mike Park, who runs the label, is a great guy, and he's good at what he's doing... When we got done making the album we were just so pumped about how it was turning out that we thought it would be a shame not to really work to promote and support the album; we wanted to give it a chance.

So I had to change jobs, which I did, and here we are. We just want to be able to take opportunities, like if the Alkaline Trio is out on tour, and they invite us to come--we realized that this time around we're going to say yes to all that stuff.

Every article about the Smoking Popes seems to take pains to compare your singing to at least one crooner, whether it's Frank Sinatra, Mel Torme, Morrissey, or anybody else. So if you had the chance to end all that and be compared to only one singer for the rest of your life, which one would it be? When it comes time for a local newspaper to summarize the band in two sentences, who do you want that to be on your press release?

My favorite has always been Frank Sinatra, and I think that makes the most sense because when you say Frank Sinatra it immediately conjures up an image in your mind which is larger than just the man. He sort of represents the whole Rat Pack, the whole genre. He represents a style and an attitude; he sort of embodies it moreso than any of those other singers.

I'm glad to finally sort that out.

So if a person says the Popes are like Frank Sinatra singing for the Ramones, I think I would be comfortable with that--that is not to say that I would actually compare myself to Sinatra, because I'm not nearly as good a singer as he was. But there is a stylistic comparison that might be helpful.

As your kids slowly approach high-school-age, do you think they'll identify with the character in This Is Only A Test? Do you think these are formative experiences?

That's something that my wife is concerned about. She thinks that whole "I don't wanna go to college" thing is going to come back to bite me, that one or both of our kids is going to use that against us in the future.

You should write another version of the song called "I Want You To Go To College."

Well -- I don't want them to go to college unless there's something specific that they're studying for that they're going to apply to a career. I don't think people should go just to go.