NKOTBSB at the Scottrade Center, 7/19/2011: Review, Photos and Setlist 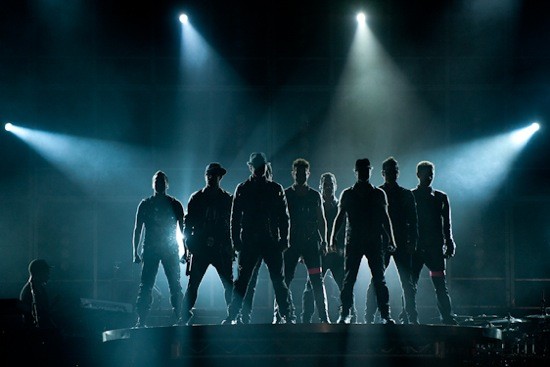 Last night's New Kids on the Block/Backstreet Boys show was an event full of glitter and pandemonium and mass hysteria. It was full of pelvic thrusting and crotch grabbing, costume changes and falsetto, abs and pecs and marginally bedazzled military-themed accessories. It was full of shrieks and whines and screams -- the whole thing was too much for at least one fan: A particularly verclempt woman was wheeled away right before the finale.

The nine-person nostalgia train entered the night amidst smoke, glitter and streamers, looking like the crystal-studded version of the biker from the Village People. Swathed in leather, studs, cubic zirconium and lots and lots of zippers that probably don't even open, the fivesome and the foursome walked/danced on to Coldplay's "Viva La Vida," a strange choice that was nevertheless met with total adulation: This crowd ate up every moment.

Although the former boys themselves didn't acknowledge it until almost encore time, a tour that brings together the best of both boy-band eras is bringing together two generations, both of whom were more than happy to squeal anytime they were given a cue. (And yes, they were frequently cued.)

They played their hits, they hit their marks, they smiled, and they induced as much swooning as can still be procured post-Beatles. If you ignore the sound quality (weak and nasally) and the themes (PG-13 sexual advances), the show was a huge hit. Plenty of the crowd couldn't care less what it sounded like. A large portion of the Scottrade Center's men's restrooms were reappropriated to become women's restrooms in order to make room for the night's core audience.

Although the two groups began and ended together with medleys of their most bombastic songs -- the effect of which was the floor literally shaking -- they spent most of the night split into their own bands and elevated on platforms that rose out of the stage.

The entire night operated like a finely bedazzled machine, with both bands never missing a cue to exit the stage in smoke, pop up from behind the drums, shake their wrists like they were auditioning for West Side Story or bite their lower lips while caressing the front of their pants. The stage served mostly as a runway for dramatic effect during songs that required members to run after a make-believe girlfriend ("Please Don't Go Girl"), drop to their knees in desperation (lots) or serenade a carefully selected mix of moms and hotties ("I'll Never Break Your Heart").

Sometimes, with great, shining pop comes great misogyny. Once the fire finished shooting from the amps and all of the miming and running in place was done, it was time to do it, in the words of the band itself, "Backstreet style." This meant an extremely uncomfortable section during which the Backstreet Boys serenaded those audience members on stools, rubbing roses (where did the roses come from?) on cheeks and dropping to their knees to kiss hands. It is important to note, however, that just because this was certainly cheesy and probably offensive, it was precisely what the crowd wanted. It also made fans jealous, and at a concert that depends largely upon latent sexual urges, this is key.

The next generation emerges: Although more than one of its members looked eerily similar to Lady Gaga, opening act Midnight Red proved that there's still room for modern boy bands in the next millennium. The same thing goes for second opener Matthew Morrison, whose bowtie-wearing, Michael Buble-like crooning and over-the-top stage presence likely earned him a following from even the (very) few audience members who have never seen Glee.

Several of the headliners -- so clean-cut twenty and thirty years ago -- now have giant tattoos. There were also more shirts ready to be ripped off than it seemed possible for one person to wear. The highlight of the night was New Kids on the Block's "Please Don't Go Girl," in which Joey McEntire, both the biggest ham and the guy with the greatest star power, ran from the back of the stage down the length of the runway, staring into the audience and feigning despair, and then continued to stare, in silence, for about two minutes as the audience listened to nothing but the sound of his heart breaking. Was it a gimmick? Sure. Did the crowd get its money's worth? Definitely. For a show of this magnitude and this lineup, that's all it's fair to ask for.

Keep reading for some notes and a set list. Critic's notebook: During the moments in which members of the Backstreet Boys took to the audience to choose special ladies, the teenager in front of me legitimately sprinted to be closer to Brian Littrell. It doesn't matter that her shirt was liberally decorated with the glow-in-the-dark names of the New Kids. This was a night for breaking boundaries, and she broke hers the second the spotlight to our left hit Brian's smooth face. Overall, it seemed like almost every audience member allied strongly with one of the two bands, but they joined forces to wail equally loudly for both.

Overheard: There were very few dissenters (because, after all, why would you go through this if not for genuine admiration?), but one was seated next to me. The best sound bite occurred during Matthew Morrison's set: "I liked it better when Josh Groban sang this." Another great (and more genuine one) came from behind me: "What do you think Nick (Carter)'s sweat smells like?"

Personal bias: I somehow missed the charms of both bands growing up. I did, however, witness the belated effects of it, and I am now almost sorry I missed the first round. I will try to catch up by the Backstreet Boys/N*SYNC tour of 2020.

Worst fashion choice: A bedazzled Public Enemy shirt, which one New Kid was sporting. Its very existence is blasphemy.