Portugal. The Man, They Might Be Giants, Crystal Antlers: This Week's New Releases 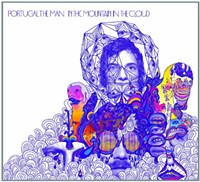 Each Tuesday, record-store clerks unpack boxes of albums and restock shelves with the latest releases. This week's listen-worthy releases include Iditarod-psychedelic rock outfit Portugal. The Man, college radio fixtures They Might Be Giants and lo-fi up-and-comer Crystal Antlers.

Portugal. The Man Portland via Wasilla, Alaska, psychedelic rock band Portugal. The Man is almost suspicious as they release their sixth studio album in six years, In the Mountain in the Cloud on Atlantic Records.

Frontman John Gourley's wafting vocals waver in between the guitars, leading the the melody in "Got It All (This Can't Be Living Now)" in which its video Gourley is a dogsledder who incidentally shoots himself in the head and somehow keeps singing. In the Mountain in the Cloud also features "So American" which probably isn't a shout-out to fellow Wasilla resident, Sarah Palin, and "Sleep Forever."

In celebration of In the Mountain in the Cloud's release, Portugal. The Man will be hosting a live stream of an acoustic performance of the new album in its entirety at 6:30 p.m. CST tonight.

Portugal. The Man will be playing at the Blue Note in Columbia on October 11th.

They Might Be Giants From starting out with performing with a drum machine to making award-winning children's albums, They Might Be Giants just doesn't, and won't, stop. Its fifteenth(!) album, Join Us, comes out today. Consisting of an impressive but not surprising eighteen songs, Join Us doesn't confine itself to any one genre, but plays around with a few. "Old Pine Box" is a pretty simple pop song, complete with synchronized clapping, which almost coerces the listener to "join" them, which may be the ultimate goal.

They Might Be Giants will be performing at the Pageant on September 24. Join Us is available for download at Amazon for $3.99, today only.

Crystal Antlers Former chimney sweepers and current Long Beach, California, indie rockers Crystal Antlers are self-releasing their third studio effort, Two-Way Mirror, today via Recreation Ltd. Though describing their sound is a bit of a task, glancing through track titles and seeing "Seance" and "Summer Solstice," among others, hints at some more psychedelic experiences, but is paired with harsher vocals and dictating drums. The title track has almost ghoulish organs and muffled vocals, which only adds to the eeriness, but doesn't get too heavy thanks to the guitar break mid-song.

Two-Way Mirror is available for streaming and you can find out more about what sounds inspired their sounds, track-by-track, over at Stereogum.