Pitchfork 2011: Odd Future, HEALTH and Other Highlights from Day Three

Pitchfork: The Final Frontier. The final, sold-out day of Pitchfork had two acts I was dying to see -- unfortunately, both of those were practically at the same time -- Odd Future at 3:20 and Shabazz Palaces at 3:45. I had to see the tall tale that is Odd Future for myself, but thus far, Shabazz Palaces' Black Up is my favorite album of the year.

3:10pm: The day started for me with myriad swag calls, as what seemed like everyone on the festival grounds crammed in front of the red stage for OFWGKTA. People were ready to rage, goaded on by the heat. Everyone was acting a tool to get just a wee bit closer to the action. Sunday was also the worst day for fence jumpers; security could be seen chasing people down from behind the Flatstock poster alley to the Porta Potties. Undoubtedly, they were Odd Future fans, risking banishment in order to buck the system like their lawless idols.

The multiple advocacy groups protesting Odd Future at the festival got a surprise visit from the group prior to their performance -- but instead of an ideological clash, Odd Future delivered a peace offering: cupcakes. DJ Syd Tha Kid preceded the rest of the boys onstage, playing Bob Marley's "One Love" and, via heavy handed irony, Black Eyed Peas' "Where Is the Love?" Cheers announced Tyler, the Creator the moment he joined Left Brain and Hodgy Beats onstage. Even a broken foot in a cast didn't stop him from crowd surfing. "Fuck, that was fun. If anyone finds a black shield for my cast, I need that shit," he said, once he made it back to the mic. "What the fuck is up, Chicago? This shit is tight as fuck!"

OF's beats are pretty ill on record, especially crowd pleasers like "Sandwitches," "Tron Cat" and "Yonkers," but live, the actual raps and sound took a back seat to pure showmanship. Displaying a limited vocabulary -- "fuck" "nigga" "bitch" and "shit" were the operative words, sprinkled with a few prepositions and the occasional "swag" -- with numerous calls to arms, "Middle fingers in the air!" "Say 'smoke weed!'" or "Free my nigga Earl!"

The legend of Odd Future, as luck would have it, is real, and it made people act a little insane. I watched a ginormous man nearly throttle a younger guy, roaring a few choice obscenities before knocking the offending high schooler to the ground. I saw other people shove strangers for bumping into them, I heard threats, and saw, amazingly, fathers taking their small children out of the crowd. By the end of the set, I wanted to burn shit and fuck school, and I haven't stepped in a classroom in three years. Instead, I fantasized about sucker punching the [redacted] who kept flinging bottle after bottle of freezing cold water over his shoulder and directly into my face/eyes/hair/notebook/camera. You wanna see "vanilla" lose her shit? Do that about fourteen times over the course of about 35 minutes. Protesting the sexist, homophobic, violent themes of the music is all well and good, but someone should have been harassing idiot parents who thought an Odd Future set was suitable for their six-year-old. The spectacle was almost worth the price of admission, and the underage Odd Future devotees/shitbags in the crowd, mosh tackling each other, purposely knocking into people, and being general turds, were part of the show.

Tyler introduced the last song, asking if the assembled wanted the good news or the bad news first. The bad news -- they were getting shut down, the good news, they were going to play one more song. "I dedicate this beautiful song from the bottom of my heart to everyone who hates me, every protester, everyone who is going to go write a faggot-ass review...I just want you to suck my dick," were Tyler's parting shots to the crowd.

Fittingly, it was "Radical," the one with the revolutionary chorus "Fuck the police." Most of the group took their turns crowd surfing while everyone spazzed out, sweat soaked, dirt covered, filled with murderous energy.

OFWGKTA were still onstage, security and crew set to making sure that their set was indeed over, though it seemed like they'd have continued if it weren't for the organizational strictures. Ever the attention whore, Tyler lingered on stage for a minute, and took a picture of the remaining fans yelling his name. Whether or not Odd Future remains a killer meme remains to be seen, but I have a feeling Tyler, the Creator is here to stay.

4:21 p.m.: The rap from Sub Pop's Shabazz Palaces could not have been ideologically further from that of Odd Future. The first hip-hop act signed to veteran indie label Sub Pop, Shabazz Palaces is Ishmael Butler, a.k.a. Butterfly of Digable Planets. He performed in a Low shirt for Pete's sake, and has probably never uttered the word "swag." Most of his words were intelligible, and the air was lousy with African rhythms (thumb piano!), mesmeric beats and cerebral non-rhymes instead of insta-pleasure stomping bass and lowest common denominator appeal. If he played "Yeah You," I missed it, but I have a feeling all of Odd Future would fall under Butterfly's depiction of "corny niggas." The female vocal sample on "An Echo From the Hosts That Profess Infinitum" was undeniable live. The juxtaposition of the two sets -- all arrogant youth and machismo from OF, all brains and musicality funneled through the easy application of hip-hop from Shabazz Palaces -- was thought-provoking. Two of the most interesting hip-hop groups in recent memory: One for a good reason, and one for a not so good reason.

7:26 p.m.: Cut Copy: There's no way out of this crowd. Panic rising in my throat, and the bubbly electro-dance pop is no relief in such close quarters, surrounded by grinning mortals such as these. Sounds great, the crowd loves it, light show is fun and blinding, but I only lasted three three and a half songs before fleeing to the sanctuary of the Blue stage. I need real fear, really fucking loud, eyebrow-scorching music. On to HEALTH I go, after navigating through a sweaty human maze for what seemed like an eternity.

7:41 p.m.: Toro y Moi was packing up its equipment, and there was an agitated mob in front of the fence separating VIP from the plebes -- only a member of Odd Future could command that kind of excitement, and sure enough, someone was holding Tyler, the Creator's tie-dyed shirt in the air; whether it was a hard-won trophy or an even trade, I'm not sure. Tyler extricated himself after a few minutes and headed back to VIP. He was standing under a tree for most of HEALTH's set, or at least until he caught me trying to snap his picture, after which he disappeared from view. 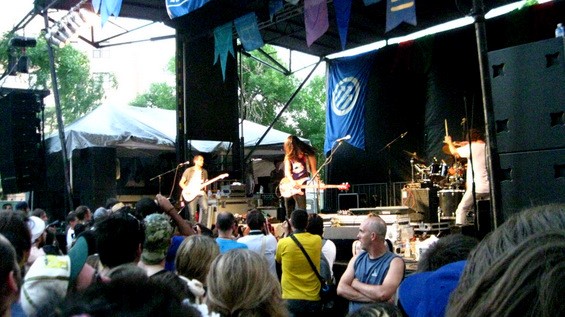 8:06 p.m.: HEALTH's maximal noise slaughter was, for lack of a better term, a religious experience. The Blue stage had been strangely quiet all day -- it was a shady refuge that needed a hefty interjection of volume. The sound check was bizarrely intense -- the mics were tested within an inch of their corded lives. During the set it became clear that such measures were essential; HEALTH's set was pure ferocity tempered with Jake Duzsik's stylized croon, seizure-inducing shifts giving way to savage caterwauls. John Famiglietti rotated between whipping his luscious hair (back and forth), ripping caustic, inhumane notes from his bass and jamming the crap out of pedals, knobs and assorted implements designed to make poisonous noise. He swung his guitar like he wanted to get rid of it while the Attila the Hunk (not his real name) brutalized his drum kit. Jupiter Keyes whizzed around, adding moar drums and dislodging myriad jacked up sounds, calling to mind blenders filled with screws, the inorganic bloodthirst of the smoke monster from Lost.

8:46pm: TV on the Radio was the perfect closer to a marvelous, strange, mismatched weekend. The art rockers knew it fell to them to carry the festival home, and hit every high point in their catalog, from Young Liars and "Staring at the Sun" to "Blues Down There" and new material off Nine Types of Light. And no one needs an encore when you close with a Fugazi cover.