Pitchfork 2011: Fleet Foxes, No Age, DJ Shadow and Other Highlights From Day Two

It's funny--spend a few minutes in the sun surrounded by 18,000 of your closest friends, and suddenly Maslow's hierarchy of needs takes on new significance, ie: We need sunscreen. I gotta pee. Someone needs water or they're going to faint. Dudes, I'm hungry. Beeeeeer. We need beeeeer. Do you remember where they said that cooling station is? If I don't get out of this sun soon I'm just going to homicide the shit out of you people.

Ah, white people problems. Day Two looked about twice as packed as day one, and yeah, it was hot, but there's no sense in complaining about it because tomorrow, (as someone was so kind to remind us about before Destroyer's set) tomorrow (er, today) is going to be even hotter. When Fleet Foxes took the stage, the sun had gone night-night and the boys set to making the oppressive heat a distant memory. 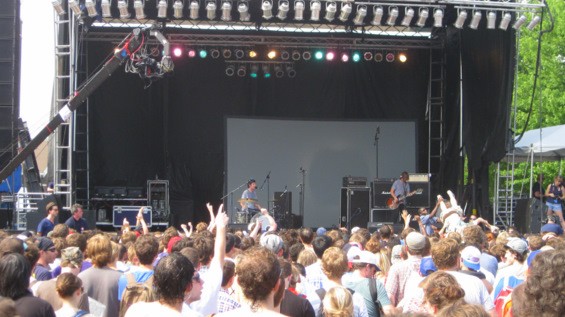 3:23pm: I walked into the festival as No Age was starting its raucous, adrenaline and testosterone fueled awesomeness. They covered the Misfits! They played "Neck Escaper!" The duo of Dean Spunt and Randy Randall were incredibly loud, fast, and way clearer live than on record. The vocal mix could have used tweaking, but they were pretty fantastic, inspiring the first real mosh pit of the festival.

4:18 p.m.: A small man waving a stick of burning sage preceded Gang Gang Dance to the Green stage--a shaman of sorts, he stayed on stage for the entire hour, waving his sage stick or a towel and nodding along to the hyperbolic pastiche of dancehall, new age, tropicalia, electronica and Middle Eastern. It's world music gumbo, but highly danceable and about as "now" as you can get.

Lead Lizzie Bougatsos jumped off the stage to greet fans while the band continued banging out its dizzy-making tribal beats. It wasn't long before Bougatos was crowd surfing as fans reverentially passed her around the human sea. "I think when you carried me I became Jesus Christ," she said, returning to the mic. "I'm showered in your love, I'm dripping it. Drippy drippy all the way down!...If you can't act crazy on stage, there's no reason to live." Gang Gang Dance's new album Eye Contact is one of my favorites of the year so far, and live it sounds very different--much less haunted and weird, but damn good all the same.

5:26pm: You know, I don't think I need to see Destroyer again. I think Dan Bejar is a genius, to be sure, but I've seen him twice now in the past three or so months, and I think I'm done. I'm down with the whole pretentious bastard schtick, and for some I think it actually boosts their careers early on, but at this point, Dan Bejar just seems like a prick.

Maybe I'm asking for too much, but for someone who seems pretty well keyed into the human condition, he makes it really difficult to fully connect with the music. His seven piece band was great, his voice was perfect, and the guys with the horns were simply badass. I took it as a sign that people around me kept mentioning how talented he is, but none of them bothered to stop talking for the entire set. I can't hate him though; he played "Painter in Your Pocket."

6:35 p.m.: Food. Dismemberment Plan in the distance. Some survey taker with an iPad asks me questions about Heineken, and if it's a good fit for the festival, and how likely I am to buy it in the future, now that I know it's associated with something "cool" like Pitchfork. Eh. Unless they start making whiskey, I will remain ambivalent about Heineken. I maybe should have mentioned I'm allergic to beer.

7:35 p.m.: DJ Shadow was, without pause or question or time to think, absolutely amazing. Had his time slot been swapped with Fleet Foxes, the crowd (at least those who would've deigned to stay for a DJ) would have danced all the way out of the park, down Ashland, and into whatever bar or air conditioned apartment they were headed to, hypothetically.

Instead, a metric shitton of people rocked out to a truly inspired set. Shadow explained that he'd warned festival organizers that his visualizers would be wasted at the early hour; the sun was still too bright to see anything.

He greeted the crowd and then disappeared, causing not a few to verbalize their dismay that he wasn't visible and ask just where exactly he was. There's a damn planet on the stage, and we're all looking around, thumbs practically in mouths, wondering "Durr, which way did he go?" The Jumbotron was curiously black for the first twenty or so minutes, until the white sphere spun around to reveal Josh Davis (CK), to the rapturous delight of all those present. The Jumbotron snapped on at the same time, and we were treated to extra-large close-ups of the man, determinedly punching buttons, scratching the decks, and generally, as the kids would say, killin' it. Live beatmaking is a beautiful sight to behold, but bass that you can feel in your hair follicles, vibrating off the shirt next to you is priceless. It felt like a dozen brontosauruses were high-stomping a few feet away.

"You can't see shit, can you?" He asked, not a little frustrated about the visualizer situation. "Trust me, it would have been really fresh." Still, he played for a solid hour, dropping Pharcyde's "Passin' Me By," Weezy's "A Milli" sped up so much it sounded like Lil Tunechi and the Chipmunks, and of course, "Organ Donor," which was sick. Granted, a lot of his set was likely too esoteric for the wider Pitchfork audience, but had he closed out the festival, it would have been a dance party to tell your grandkids about. Well, it kind of was anyway. Dude's brilliant.

8:29pm: I had planned on catching the first half of Shadow and then heading over to the Blue stage for Zola Jesus, but I just couldn't leave the bass. I caught her last three song though, and she was in fine form, prowling across the stage in a gray satin confection that almost looked couture. The crowd was a little thin by the time I got there, but she seemed genuinely in a good mood. Though "Manifest Destiny" has been her go-to closer for a while now, she played that second to last, and opted for new single "Vessel" to finish the set. I got a little giddy when she picked up two shiny drumsticks and started gesticulating with them, and even more giddy when she added to the scorching industrial din by beating electronic drum pads into submission. "No words," she said before taking her leave.

8:44 p.m. I'm a fair-weather Fleet Foxes fan, and I expected to feel the same way about the Seattlites that I did Thurston Moore and Neko Case -- that the music is just too intimate for the great outdoors. Boy, was I wrong. Fleet Foxes were as pleasant as the balmy breeze cleansing Union Park. I found them surprisingly compelling; they didn't just recreate the albums on stage, there were instrumental red herrings, songs glided imperceptibly into one another, and getting lost in the lush harmonies for a solid hour was definitely one of the best parts of the festival so far. In interviews, principal songwriter and lead singer Robin Pecknold sounds about as confident as Woody Allen and Larry David's love child, and he appeared truly humbled by the massive, exuberant crowd. "Thank you guys so much for being so fucking awesome. I was really nervous about this, but I think it's going alright." Before the end, he proclaimed Pitchfork the "best festival, no bull" and said they'd be back. Naturally, they played some of the best tracks from Helplessness Blues, but peppered in enough of the old favorites; "White Winter Hymnal," "Mykonos," "Tiger Mountain Peasant Song," "Blue Ridge Mountains." Restrained where they needed to be and swelling to blissful crescendos when warranted, it was a solid cap to Day Two. Though I really wanted someone, anyone, to yell "Play 'Horse with No Name'!"