Pitchfork 2011: tUnE-yArDs, Guided By Voices And Other Day One Highlights

The weather was perfect and apparently -- horrifically -- it is mom-jean-short-season. It was a day for eccentric acts, the line-up carefully curated to force superfans into buying Friday tickets. The will call line stretched around the block and then some.

4:32 pm:tUnE-yArDs was my first set of the day, due to my one-hour of sleep and sudden inability to navigate the city of Chicago. While Merrill Garbus was still doing her soundcheck, some girl was already blown out enough to warrant being half-carried, half-dragged to a clearing by two attentive dudes. 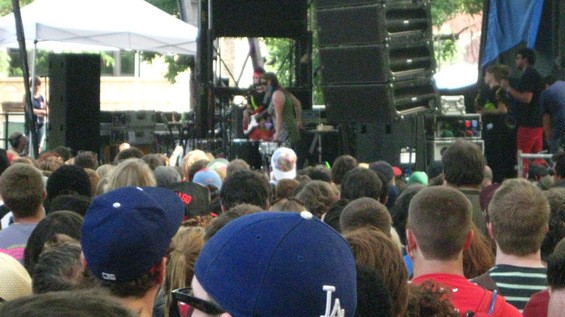 The fact that Garbus is selling out shows and her latest disc is on almost everyone's short list for best albums in 2011 is proof that there is justice in the world. She played heavily from whokill, and we couldn't be happier. Whether her everything-plus-the-kitchen-sink approach to genre gives you a mental ouchie (My Backstreet-Boys-loving weekend host just said "What is that godawful sound?" after overhearing the last minute of "Es-So"), Garbus is the real thing.

She doesn't have a beautiful voice, but she's got so much soul she could be singing with Steven Hawking's voice box and people would still care. She emitted a few feral squalls and well-timed falsetto wails, sounding like the second coming of Robert Plant, exuding similar effortless magnetism. The dueling sax-work from her band started out as cheer-worthy free jazz digressions, but as the set wore on the instrumentals started reminding me of Dave Matthews Band, which was right around the time that people started leaving to go see Thurston Moore (mistake) or catch the last few minutes of Battles.

Banter: "You guys look like an '80s video with your sunglasses. There are so many sunglasses that remind me of the '80s."

"They just told us we're doing an okay job and we can keep playing, if that's okay with you."

"You guys are a massive bundle of love!"

Overheard: "He was like 12 though, I'm gonna smoke a blunt for children."

5:33pm: It's a shame that Battles and tUnE-yArDs had the same time slot, and it was also a shame that Thurston Moore was wasted on this festival. (Oi, the number of times I overheard "I don't know Thurston Moore" or "Who is that again?" made me want to go all Odd Future on these posers, but I managed to keep myself from stabbing anyone).

By way of an introduction, Moore queried "You guys wanna hear some songs about rape, incest and murder?" (Obviously not an Odd Future fan). Moore's solo album Demolished Thoughts is beautiful and plangent and a million miles from anything Sonic Youth would put its name to, but the music is ill-suited to an outdoor venue, especially in the middle of the damn afternoon. This music needs darkness, cramped space, stagnant air with the faintest hint of body odor and fart. His band was astounding -- Samara Lubeski's winsome violin made me look up in awe more than once, but the set, as a whole, was about as compelling as watching people knit for forty five minutes.

Guided By Voices brought a large, mostly male crowd to the Green Stage. A friend said he was mostly looking forward to GBV -- "I'm going to blow my load at 6:30 and be done for the entire weekend." He did, and so did all the other once-upon-a-time nerds whose lives were saved by these lo-fi demi-gods. You have to love a true Guided By Voices fan -- they're gems in real life too. They have the patience and the wherewithal to sift through a few million songs from these prolific bastards. The crowd cheered when Robert Pollard said or did anything -- from swinging his mic by its cord, doing "the rock jump," or simply shouting "Pricks!"

"It's a pleasure to be playing for you kids here at the Pitchfork Festival," he said, intentionally sounding out of touch. The "original, classic line-up" of the band looked arthritic, but they played like it was '93, and that's exactly what you want from a festival set -- a band you might not have seen otherwise, a reunion where the band members are pleased as punch to just play together again, and 20 or more songs jammed into 40 brief minutes. Never losing energy, they played a bunch of Bee Thousand cuts, "I Am A Scientist," "Kicker of Elves" "The Goldheart Mountaintop Queen Directory" and opened the set with Neko Case sitting in for "Echos Myron."

8:38pm: The sun was disappearing and the crowd was primed for an eccentric freak out from Animal Collective. Instead what they got was a head-scratching set of new and obscure songs; even the familiar material was so obfuscated by electronic detritus it was hardly discernable. Let's just say it was a far cry from inducing the crowd response we wanted to give -- "Oh, fuck ponies! They're playing Strawberry Jam in it's entirety!" But everyone whipped out their marijuana delivery devices anyway and blazed, settling in for the expected -- a loud, lengthy, stamina-testing set from the first headliners of the weekend. Expectations were dashed by the third song, when even the really, really stoned people relinquished their down-in-front spots in order to seek entertainment elsewhere, in whatever form they could find it.

The band played a number of new songs, including "Mercury" and "A Long Time Ago," both of which sounded like what I imagine doing mushrooms with Ariel and Flounder would sound like. Underwater, distorted, full of "you people aren't real" moments. Skittering beats and convulsive synths hung thick in the air like toxic fumes from a rotting bog. "Did You See The Words," "Taste" and "Summertime Clothes" were barely recognizable until Avery Tare's heavily warped vocals started in on the choruses, cutting through the sonic mesenchyme. Overall, a gigantic snooze, but it's not like it wasn't good; it just wasn't the great kick-off start everyone wanted.

I Wouldn't Complain If: It had been louder. Or I had been anything besides woefully sober. Or I'd been laying on a concrete floor somewhere in a semi-empty warehouse, overhearing the guys jam. Or the blessed Jumbotron had shown the action onstage instead of a bunch of colorful interstellar-urban landscape-human body visualizer nothingness. When 90 percent of the crowd can't see shit, they're less inclined to give a shit.

Best Quotes: "It's like a forest fire over here dude." Says the guy holding a blunt. "Can I just assemble you people for a minute here? How fucking boring was that set?!" (And that guy was on mushrooms).