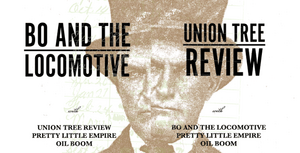 Local music scene up-and-comers Union Tree Review and Bo and the Locomotive took to the streets of St. Louis earlier this week, performing pop-up shows in support of their dual album release show on July 30 at the Firebird.

Playing two songs per set, the two bands stopped by a requester's home, Sasha's Wine Bar, the MetroLink stop at Big Bend and Forest Park Parkway, on the rooftop of the parking garage on the Delmar Loop, Hausch Blackwell L.L.P., invaded Pretty Little Empire's practice space and completed the day with a final performance at Tower Grove Park.

When the musical conglomerate played a pop-up show atop the parking garage directly across the street from the RFT offices, we went over to have a listen and sweat a little, and ended up following them around for the rest of the afternoon as they made some more stops in the city.

After cooling off and rehydrating, the folks of Union Tree Review and Bo and The Locomotive packed up their gear and we were off to our next destination, Hausch Blackwell, LLP. We found ourselves in a pretty swanky law office and got to the makeshift stage one plush courtyard, two elevator rides, a quick stroll across another parking garage and one flight of stairs later.

Though it was still pretty warm outside, being surrounded by the nicely maintained lawn and flowers of a high-rise courtyard with legitimate seating seemed way more endurable than the unforgiving concrete decor of the last pop-up spot. The lawyers were too busy to come down and enjoy the pop-up show, but we did spot some curious faces peeking down at the shindig from their office windows.

The bands didn't spend much time after their sets hanging around. "I hope they don't call security," said one lawyer.

Bo Bulawsky of Bo and the Locomotive and Matt Strom of Union Tree Review thought of the concept of doing these pop-up shows in St. Louis in attempt to try and promote their band's albums in a unique way.

"We were just trying to figure out a way to promote the show in a different way than just making flyers and putting it on Facebook," said Bulawsky. The bands utilized Twitter and Facebook on Friday to field requests from listeners for places to play today, which made for a pretty full schedule, especially in sweltering hot weather.

After they scuttled out of the air-conditioned haven back into the heat, the bands wasted no time in figuring out a way to get the heck back inside some sort of building, this time by heading on over to Pretty Little Empire's practice space, just a couple of miles away.

Sitting above an in-and-out grocery and liquor store, Pretty Little Empire's Will Godfred let us in to his apartment and the band's practice space, which became pretty cozy when ten people, Union Tree Review and Bo and the Locomotive's instrument collective and Pretty Little Empire's gear were all sharing a living room.

Something about being in such close quarters with a bunch of instruments and cords and having proper shade seemed somehow energize everyone. "I don't know why, but claves are fantastic!" yelped Union Tree Reviews Patrick Swan, noting his discovery while setting up the keyboard.

This was both bands' first electric set of the day, and it carried well, ending with a chorus sung by the entirety of the two band's members, sure to be making a hum through the sunny, stuffy halls of the old apartment building.

"I'd do this again in a heart beat," Union Tree Review's Patrick Swan said. "The fact that it was hot, I can even deal with that. I've driven in sweaty fans with multiple men before and this -- it's just as fun."