Why U2 Is Still Relevant 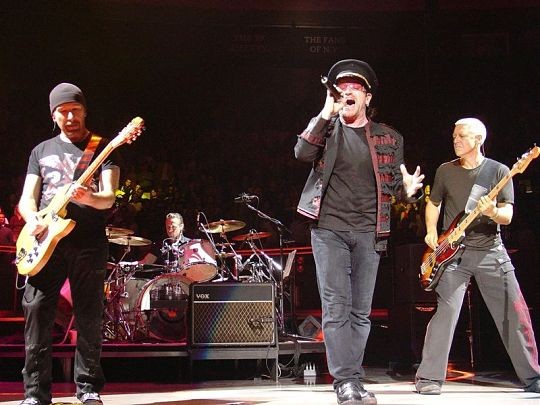 Busch Stadium staff is currently in the midst of a weeklong reinvention of the venue, and the reason is a band with a live draw almost as big as its ego: U2. By Monday, all of the grass on the field had been dug up in preparation for the band's epic 360 tour stop on Sunday, a sacrifice that's almost symbolic. Only a band this huge could make something like this happen in a series of carefully plotted destinations that span the country.

The remaining nosebleed tickets for the St. Louis show start at $54, and more than 50,000 people are expected to attend the spectacle. It will be the largest event ever staged at Busch Stadium, which, considering the fact that the new Busch Stadium is bigger than the old one, makes it pretty huge (we're music people, not math people). Even more impressive: All of this is happening about thirty years after Bono's band's heyday. It all begs the question: Why is U2 still relevant?

First, we'll play devil's advocate: You could argue, pretty successfully, that U2 is not relevant. Bono has been politically active even longer than he has been kind of a blowhard, and the band's name comes up almost as often in talk of humanitarian efforts as it does in late-night discussions of legitimate rock & roll. This makes Bono a good Samaritan, but it lessens both his self-awareness and his reputation as a badass rock frontman. The phrase is not "feeding the hungry and taking names," after all.

Still, depending on how old you were when "Sunday Bloody Sunday" came out and how well you were educated about its contents in high school, you might remember that with great vocal power comes an acceptable amount of humanitarian responsibility.

U2 fans who care and are old enough to not text like the band's name is spelled still remember that the music was great, even if the humanitarian stuff has frequently been ill-advised, and they will probably also be in the not-so-bloody-nose section on Sunday. And they will be there because U2 has entered the rarefied pantheon of can't-miss live bands with little creative music left to make. Despite a tarnished record of retro-revival success and the inexplicable attempts at Spanish on How to Dismantle an Atomic Bomb, U2 is currently the eye of the highest-grossing tour storm in history.

People will still buy the band's CDs, as much as there are people alive in this world who still buy CDs, but what they want even more than that is to one day bring up the time they went to a U2 show. As a commodity, U2's value is as an experience, not as a tangible product you can purchase at Best Buy. If you attend the St. Louis stop on the 360 tour, you are supporting the niche relevance of a band that has found a way to sustain its arena-packing momentum more-or-less indefinitely in a way that few other bands (and all of them fit similarly epic proportions) can.

Ticket sales are down worldwide, but more than 50,000 of us will be watching Bono preen his way across the most elaborate stage in the world. The evidence here is clear: U2 has replaced street cred with stage cred.