The Weezer Cruise: A Beginners' Guide To Fitting In 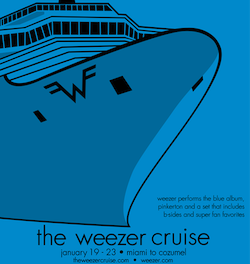 I'm half-convinced, after yesterday's news, that I'm living inside a Pitchfork blogger's fever dream: There is in fact a Weezer Cruise scheduled for next January, and it is exactly what it sounds like: Weezer will be on board, performing with a swarm of indie and indie-ish bands, and everyone you meet will be wearing Buddy Holly glasses with the lenses popped out of them. And the promo video uses "Holiday," and when it heads back toward Miami on the last night you can bet people are going to be singing "Island in the Sun" while shedding last-day-of-camp tears.

I wish I could never feel bad any more (hip hip), but I can't make it, so let me live vicariously through you, the neophyte: If the Weezerphile in your life has offered to take you on this particular romantic getaway, here are all the ways you might answer the most important question you will ever be asked by a Weezer fan. Answer correctly, and fit in; answer incorrectly, and be ostracized for four days while people talk about how great Ozma is.

Be proactive and ask the question first, lest you be asked it at an awkward moment. What's your favorite album post-Pinkerton? Phrase it exactly like that--Weezer fans can sense your hesitation. To insert yourself into a pleasant place on the Weezer Fan Hierarchy, respond to their answers as follows:

Green, Make Believe: "Nice, me too! My name's [your name]!" These answers are orthodox enough that you needn't converse about Weezer any further, for the moment. If the Make Believe fan looks like you're about to hit him with a rolled-up newspaper, add something like, "Man, it's totally not just 'Beverly Hills', right? There's so much depth."

Red Deluxe, Raditude Deluxe: "Yeah, man, me too! Rivers just can't sequence an album to save his life!" Mention "Miss Sweeney" for the Red Album or "Run Over By A Truck" on Raditude as confirmation of that fact.

If your interlocutor just says Red, or Raditude, he is trying to trick you--respond, "You mean Deluxe, right?" You will be handsomely rewarded.

Maladroit: Your interlocutor is wearing a t-shirt with a picture of someone shredding a guitar on it. Pounce--now is your chance to assert yourself on the Weezer Fan Hierarchy by relentlessly belittling his favorite post-Pinkerton album.

"Possibilities!?" you could say, "more like 'possibly' I'm going to throw up in my mouth, and then in your mouth, and then in everyone's mouth, on account of how anonymous and gauche I find half the songs on that half-finished album!" Or you could maybe do something with "Love Explosion," but keep it G-rated, somehow.

After you've finished, high five one of the Green Album fans--you're in!

Hurley: This is also a trick, but I don't know what the angle is just yet. Say, "You mean Deluxe, right?", and then run as fast as you can back to your stateroom.

Post-Pink? I haven't listened to a Weezer album since I saw "Hash Pipe" on MTV and tried to assassinate Mikey Welsh: Do not break eye contact. Back away while humming the countermelody from "Falling For You."

You can get to know 95% of the people on the Weezer Cruise without having been a Weezer fan your entire life, but the people who have carried the betrayal they felt when the Green Album came out for 10 years now are well beyond your pay grade. Find one of the Maladroit fans instead; they're generally nice guys, so long as you're willing to talk about the differences between the various demos of "Burndt Jamb."