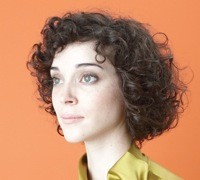 St. Vincent will release its third LP, Strange Mercy, on September 13th on 4AD. Her previous effort, 2009's Actor, saw Clark continue an impressive trajectory started with 2007's Marry Me. In addition to these tour dates, St. Vincent announced the tracklist of Strange Mercy today, if that interests you.

Clark's hauntingly angelic voice has earned her previous work as a backup member of both the Polyphonic Spree and Sufjan Stevens' band, but her solo career involves no coattail-riding. She has been making strange, energetic, beautiful songs since setting off on her own.