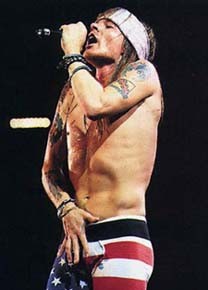 Overshadowed by the celebration of Independence Day, another explosive moment from American history came and went on Saturday, July 2 -- the twentieth anniversary of the infamous Riverport Riot.

That's right, it was July 2, 1991 when Axl Rose made that infamous dive into that Riverport crowd because someone dared take his picture. An all out riot ensued and neither the band nor the amphitheater have ever been the same. Nowadays, we hope Rose appreciates the cosmic irony every time he takes the stage and looks out into a sea of iPhones and other recording devices snapping up his visage for all of YouTube to watch.

So in honor of this historic event, we decided to take a look back at the top ten concert brawls that have been captured thanks to those handy personal recording devices.

Check out the videos after the jump.

We guess this fan forgot that pit bulls are territorial creatures. Unfortunately for him, this dog's bite is just as bad as his bark.

Knock this video up to the 2:30 mark for the melee. It appears that the mosh pit spills up onto the stage, which causes all hell to break loose. People are fighting, swinging guitars, mic stands and dive bombing back into the crowd. Now that's hardcore.

8. Touch Me One More Time and See What Happens

We're still wondering why in the hell anyone would think it's a good idea to rush the stage and grab Snoop while his entire crew is right behind him. Things do not turn out so well for this guy. Amazingly, the music never stops and they commence the party like nothing ever happened.

A man identified only as Charlie gets into an exchange with a security guard. The fight falls into the crowd. Pete Wentz follows, dives right into the action and starts throwing down.

An overzealous security guard got a little too rough trying to fish Kurt Cobain from the crowd. The prophet of grunge responded with a Fender to the head. It went downhill from there.

It's a bit difficult to maintain that edgy, evil persona after the world sees you get dropped from one punch. However, Danzig later explained that he let the guy knock him out so he could avoid getting sued if he retaliated. Sure you did, Glen.

Besides his superhuman tolerance for pharmaceutical delights, Keith also enjoys snorting his dead father's ashes, sailing with pirates and swinging his guitar like a freaking battle axe at wayward fans.

2. You Just Got Owned by Billie Joe Armstrong

Who says Green Day is more pop than punk? Okay so maybe a lot of people do, but watch this video as Armstrong goes full on kamikaze and dive bombs an unruly fan with an epic dropkick from the stage.

Many fans of Tool may not know that frontman Maynard James Keenan has his purple belt in Brazilian Jiu Jitsu under Rickson Gracie and that he's even been featured in Black Belt Magazine. Obviously, the fan in this clip wasn't aware of that.

However, this video earns the top spot for its uncanny marriage of song and action. A young man rushes the stage during Pushit, whose lyrics include the following:

I will choke until I swallow...
Choke this infant here before me.
What is this but my reflection?
Who am I to judge and strike you down?

And what happens? Maynard Judo flips the kid to the ground before securing a rear naked choke and squeezing the air right out of him. Now that's a wicked case of life imitating art.