Matisyahu at the Pageant, 7/9/11: Review and Setlist 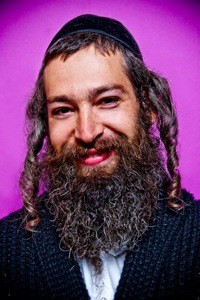 Only at a Matisyahu show will you find both yarmulkes and pot: The Saturday night crowd at the Pageant was transfixed as one of God's chosen people beat boxed and rapped his way across the stage.

Matthew Paul Miller, better known by his Hebrew and stage name Matisyahu, returned to St. Louis Saturday night touring with the band's new album Live at Stubb's Vol. 2. The Hasidic reggae musician is known best for singles like "Jerusalem" and "King Without a Crown" that have a heavy, subdued reggae beat strung throughout. But last night Matisyahu, who touts himself as a musician continuously undergoing a metamorphosis, performed a setlist that swung from dance-pop over to rock and back to reggae.

Matisyahu and his new band, the Dub Trio, took the stage at 9:30 following the methodical and stage-setting reggae beats of the Murder City Players. As fate would have it, Matisyahu met the Dub Trio while performing Live at Stubb's vol. 1 in Austin, TX back in 2005.

Since then the beat boxing reggae artist has released three studio albums, three live albums and several EPs. At Saturday's show he pulled from several of those albums, like his last Light and his 2006 album Youth.

Fists immediately started pumping the air as the band took the stage. The tassels of his prayer vest dangling near his knees as Matisyahu bounced around. The band touched off with a few songs that clung near its reggae roots. But even then, classics like "Time of Your Song" from his Youth album aren't 100 percent reggae. There's a little rap thrown in along with what sounds like a Jewish call to prayer - part of Matisyahu's trademark -- a thread of Judaism stung through each song.

Matisyahu definitely looks the part of a Hasidic Jew, adding to his captivating stage presence. But it's not just the yarmulke. It's his towering height, his rhythmic yet robotic dancing and of course and his ability to turn himself into a human drum set, which he did half way through the show.

Some people talk with their hands. Matisyahu beat boxes with his. It all starts out slow and simple. A few "boom koo ka choo's" that start to build into an unbelievably complex beat. His voice serves as each instrument. As he adds each musical layer, his left hand rests poised at his side. It jerks and then rises to float on an invisible wave before falling back.

After this human boom box slowed down, the Dub Trio snuck back in with an almost techno dance beat. That's where the music of old met the new, dancier Matisyahu.

The group performed the song "Darkness into Light" that might best demonstrate the transformation of Matisyahu's music stylings. The song is stripped of the pulsating reggae guitar line and is replaced with a sort of dance-pop sound. Then all of a sudden everything slows down and it flips to rock then to rap. It might sound disjointed, but somehow Matisyahu makes it flow smoothly. Even without the reggae backbone, the song still sounds like him.

And to ensure the revved up audience before them didn't feel cheated of the reggae-rap they love so much, the band spent the night switching back and forth from rock/dance-pop to reggae/rap-prayer, hitting on a crowd favorite, "Jerusalem," from the album Youth.

Midway through the song, Matisyahu pulled a young boy onto stage. A dance-off ensued, the tassels of both boys' prayer vests flapping. Then with little warning Matisyahu picked up the little boy and literally threw the lad, head first, into the sea of arms before him. Don't worry, the boy was just fine and was surfed back up to the stage.

The show was a well-executed showcase of the sounds and styles of Matisyahu, an artist with his roots firmly planted in his faith and in reggae but with an unending desire to grow and develop as a musician.

Personal Bias: The first time I ever heard Matisyahu was while working as a barista at Starbucks. This was a recent thing, too. The pre-selected Starbucks playlist has a reggae station that for the most part ignores all reggae artists that don't go by the last name of Marley. But mixed amongst the Fugees and the Bob Marley "King Without a Crown" came on one day, and it was such a welcomed change that I ran to the back of the store to see who the artist was. And there and then, my love for Matisyahu was born. I have to admit that I wasn't a huge fan of the Light album at first; I missed the simpler beat of albums like Youth. But it's growing on me.

Overheard: -"I invited my friend to see the show with me, but he said the last time he saw Matisyahu the beat boxing drove him crazy." A fist-time Matisyahu attendee. The beat boxing might have been ample at previous shows, but Saturday's night performance was graced with very few Matisyahu solos. -"I'm so glad I skipped 311 for this!" A Matisyahu fan who came to the Pageant after seeing Sublime at the Verizon Wireless Amphitheater. -"That was fucking insane! He actually threw that kid!" An excited audience member after the show.