Patrick Stump Is Coming To Fubar (!?!) 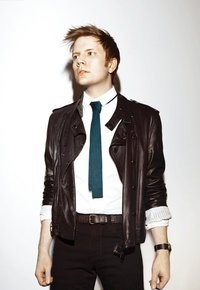 Patrick Stump, the Fall Out Boy singer who is finally free to pursue the pop and R&B he's always loved, is coming to St. Louis. His former band's last show here was at the Pageant. His solo career has seen him on tour with Bruno Mars and Janelle Monae, and he'll be playing Lollapalooza this summer. So of course the just-announced gig is at Fubar. Yep: Fubar.

Now, this is not as outlandish as it might initially seem: This is Stump's second solo tour and the first was also at smaller clubs, albiet in much larger markets. Still: His Minneapolis stop on this tour is at a venue that's got the Get Up Kids and Thurston Moore in the next couple weeks, and in Detroit he plays the Magic Bag, upcoming host of Toots and Maytals and Brian Posehn. Basically it's all over the place, which probably reflects Stump's fan base at this point anyway.

The St. Louis show is a Mike Judy production, and tickets are $20. They aren't on sale yet -- Stump says pre-sale will begin soon.

Although Prince ("I In Lie"), Justin Timberlake ("It's Gonna Get Better") and Michael Jackson ("Explode") are obvious inspirations, the album is much more than rote imitation. Horns, handclaps and quirky noises pepper "Everybody Wants Somebody," while proggy guitar interrupts the torchy piano plinks of "Allie" and the measured falsetto and retro beats of "Dance Miserable" hit at New Jack Swing, the R&B/hip-pop hybrid popular in the late '80s. Better still is the one-two punch of "Run Dry (x herat x fingers)" and "Greed." The former boasts a scorching bassline and exploding-confetti synths, while the latter is a high-stepping soul-funk jig.

The review isn't on the AP web site at this point, so go check the print edition if you'd like to read the whole thing.