Florence + the Machine at the Pageant, 7/5/11: Review, Photos, Setlist 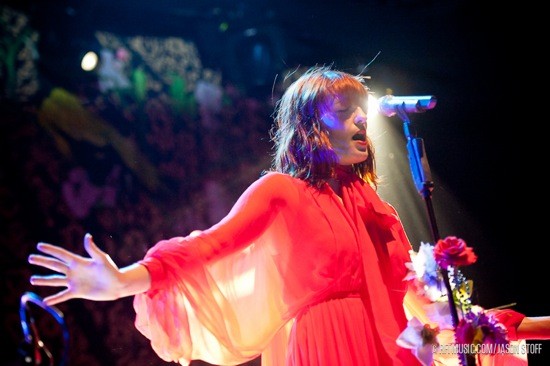 For a band with one album, Florence + the Machine caused a commotion usually reserved for well-established acts with full catalogs of favorites. Minutes after the doors opened, the Pageant's seats were filled and the extended under 21 section verged on overflowing. The excitement level? Uncontainable.

Pity the opening act for a hugely anticipated main attraction, especially if the opener seems to have nothing in common with the headliner. Hanni El Khatib could have been in for a rough set if he wasn't so damn good. The Los Angeles singer/guitarist, paired with drummer Nicky Fleming-Yaryan couldn't seem more different from Florence + the Machine on the surface, with their stripped-down garage rock aesthetic, early rock vocal harmonies and fuzzy reverb. While the sound and look might be different, they're cut from the same base pattern with intensity, dark energy and a low-register throb. Differences be damned, the audience was sucked in.

The crowd shrieked and screamed at every move behind the black curtain as the stage was set for Florence + the Machine. The noise reached a fever pitch when the band built to a frenzy before the curtain dropped to reveal a black-lit backdrop of flowers and birds. Bird cages housed light bulbs punctuated at the base with strobe lights. It's Liberty of London meets the brown acid, and the only styling befitting Florence Welch.

The towering redhead posed at the front of the stage, draped in a sheer red dress that brushed the floor, bare feet and legs revealed by high slits, her torso modestly hid by a red bodysuit.

Such stage dressing and costuming can distract from a sub-par performance. Not the case with Florence + the Machine, who quickly proved to be better live than on recording. The Machine consisted of drums, guitar, bass, keyboards, and a harp. Each musician had a secondary percussion instrument. In Florence's case, it was a stand-alone snare drum.

The orchestration was simple compared to the arrangements on the band's debut album, Lungs, and that was fine. With soaring vocals that ranged from guttural moans to piercing yips, Welch's voice didn't waver through the show. One minute she's screaming like an angry punk ("Howl") the next she's a soul chanteuse ("You've Got the Love"), pulling it off effortlessly.

Playing to every corner of the house, Welch knows she's adored, and she plays it for all it's worth: running, twirling, scarf dancing with the yards of sheer fabric from her dress. While her confidence in the audience's love radiates, she doesn't use it as an excuse to be lazy. Instead, she feeds off the crowd's energy, not stopping to speak until after "Howl", where the caged light bulbs pulsed to the heartbeat of the drums.

Speaking was pointless, as Welch couldn't be heard over the screaming of the crowd, but they calmed when she and harpist Tom Monger did a quiet take on "Cosmic Love", with Welch holding a huge sustained note at the end. Later, during "What the Water Gave Me", Monger rocked a harp solo.

Several songs, including "Cosmic Love" and "Drumming Song", were extended from the originals, possibly to pad the brief fourteen song set list, but the extensions weren't obtrusive or jammy. They fit the swell of drama that flowed through the set.

As the set neared its end, Welch initiated a sing-along to "You've Got the Love", her cover of the 1986 song by The Source with Candi Staton, leading into a call-and-response opening to "Rabbit Heart (Raise it Up)".

The two-song encore ended with the band's signature hit, "Dog Days Are Over", prefaced by Welch explaining that sometimes you're so happy you just have to jump. She instructed the audience to jump. No one asked how high; they just did it, leading into a full-crowd bounce and roaring sing-along, the kind borne from connecting with the exuberance and joy of a song.

Personal Bias: -Thanks to Florence's popularity on awards shows and movie soundtracks (Eclipse and my movie nemesis, Eat Pray Love), I've held the notion that this was going to be a night of Mom Rock, aimed at middle-aged women weaned on Tori Amos and Sarah McLachlan two decades ago, a demographic I'm loathe to admit I'm part of. But I am. -The super-fast ticket sell-out for an artist with one album always leaves me skeptical about what the fuss is about.

By the Way: When one asks if the empty seat beside you is taken at a sold out show, it's not meant as a personal affront. There's no need to be snippy about it.

Overheard: -In response to eardrum-shattering shriek from the under-21 section as the show began. "Is this Justin Bieber?" -"She's what would happen if a phoenix and Stevie Nicks had a baby."