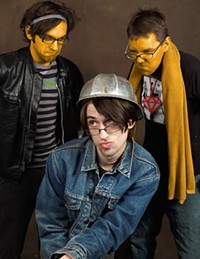 Cranky Yellow has had a rough go of it the past few months. The indie curio shop has been blasted by the City of St. Louis and the state for various code violations such as failing to properly dispose of trash, failing to pay taxes, and now, for holding "assemblies" in a basement that contains mold (what St. Louis basement doesn't?). Although mold was the reason given by Cranky for closing its doors, City Hall seems more concerned about the space's lack of a certificate of occupancy.

For the past year, the sweaty subterranean room has hosted both national touring and local acts across a multitude of genres, from punk and mind-bending experimental to indie rock. And while the Cranky staff has done as much as they can to fight the mold by way of humidifiers and bleach, the rainy spring has taken a toll on Cranky's basement.

So last week, the curio shop and assembly space announced it was no longer holding shows or art exhibits in the basement, after receiving what Cranky Yellow Owner David Wolk described as a "cease and desist" letter from the city. "I must say, I prefer a cease letter to a 'go directly to court' letter like last time," says Wolk.

"I'm not sure anyone reported the recent mold stinky or if it has anything to do with the letter," says Wolk. "I don't know much about the letter since it was issued to the landlord. He just explained that it was in regards to the 'assemblies' and offered his sympathy for my hardships."

Kara Bowlin, press secretary for Mayor Slay, says that the letter Cranky's landlord received was not a cease-and-desist, but merely a notification that the place is in violation of a building code. "All they have to do is get a certificate of occupancy for their basement and then they can use the basement again," Bowlin says.

Bowlin added that the letter's intent was not to shut Cranky down, just get the place back up to code: "We're happy to help. They're not shut down or anything like that, they just can't use the basement unless they get a certificate of occupancy."

The retail store was to remain open, but abruptly on Friday evening, Wolk posted an announcement that Cranky is closing its doors for an unspecified period of time.

Wolk contends that revenue from the basement venue accounted for 35 percent of their monthly income, and without that, it's too difficult to continue. "I don't know if it's feasible to have shows again," he says. "I'm on a mission to save the music and we're dedicated to spending the coming months reviewing and altering our process in order to find a resolution."