It's Here: Chuck Berry Statue Finally Installed in the Loop

After an hour-long installation and a stint duck-walking across the sky with the help of a crane, the latest tribute to St. Louis music legend Chuck Berry is finally installed on Delmar across from Blueberry Hill. And Lord of the Loop Joe Edwards couldn't be happier.

"I felt it would always happen," says Edwards. The pony-tailed owner of Blueberry Hill, who is also a friend of Berry's, was among a handful of fans to make the statue's 6 a.m. installation. His cheerful button-up shirt, covered in WWII-era planes, matched the smile that never strayed from his face. "This is going to be the most famous statue in St. Louis -- overnight." 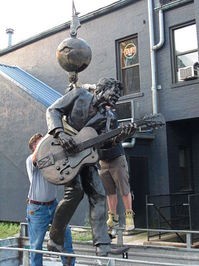 Although in recent months the statue faced criticism from U. City residents who opposed its installation in light of Berry's criminal record, the talk this morning focused firmly on the musician's legacy in St. Louis, the city he never left. The statue was made possible by more than $100,000 in donations, and its unveiling this morning was completed in front of Berry's son, Charles Berry, Jr., the statue's creator, Harry Weber, KMOX personality (and fervent statue supporter) Charlie Brennan and Edwards.

"He's the coolest dude in the world to me," says Berry Jr. "I was here yesterday, and people were taking pictures of the hole in the ground where the statue was going to be. I was like, 'It's a hole in the ground!'"

The new statue shows Berry in the duck walk position that has found its way into both music lore and the original Back to the Future movie. While moving to its new home, the eight-and-a-half-foot-tall piece spent about twenty minutes dancing in the air while hoisted on a crane over Fitz's, earning joking comparisons to both Peter Pan and David Lee Roth.

Settled into the ground in front of the restaurant, the statue is rooted across from both Blueberry Hill and Chuck Berry's spot on the St. Louis Walk of Fame. Berry was the first celebrity to earn a spot.

"It's the most in-motion statue I've ever seen," says Edwards. "It adds a lot to his legacy: He was born in St. Louis on October 18, 1926, and he never left St. Louis. A lot of people move to New York or California, but he never had to. He stayed here, and his music is known by all." 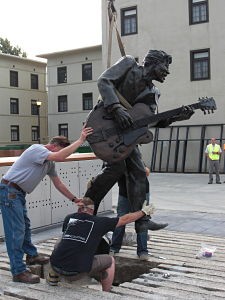 Now that the statue's in place, the plaza that holds it will face a few cosmetic changes before its official dedication July 29. Berry's lyrics are etched into stone on the walkway; the statue will eventually be partnered with lights synchronized to the bars of "Johnny B. Goode," Berry's most popular classic. The construction team will also plant trees around the statue by the end of the month.

"I think it will probably hit me when it's dedicated," Berry Jr. says. "My mom and dad will stand right there, and my mom will start crying, of course. This plaza here is dedicated to one person, and that kind of trips someone up."

Edwards remains focused on the future of Berry's legacy, one he hopes to develop with the finalized plaza.

"Berry's influence is enormous," Edwards says. "His music is even in capsules that were sent into space in 1977. They've passed our solar system now. Some years or millennia in the future, some life form will find that, and 'Johnny B. Goode' will be playing for them. That's awesome."