What It's Like To Audition (Unsuccessfully) For American Idol 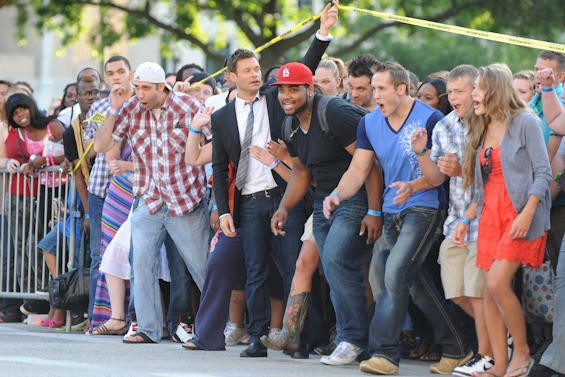 Ed: The American Idol Season 11 auditions attracted more than 10,000 hopefuls to the Scottrade Center yesterday. Recent Mizzou grad Mallory Gnaegy was one them, and she has agreed to let us publish her account of the experience.

In the first fifteen minutes of auditions, only one man took home the golden ticket. A ticket that sends him to the next round of St. Louis American Idol auditions where he will sing for the judges and possibly move on to a third round in L.A. The 10,000 plus hopefuls filling the seats of the Scottrade Center applauded him, wishing they too would have a chance to become the next American Idol. But for every 500 attempts, only a few singers gets passed through.

A man in pink tights and a person wearing a banana costume made the cut. A few of the other winners were wholesome looking Midwest gals in strapless printed dresses and cowboy boots. Perhaps one was the next Carrie Underwood, an Oklahoma native and Idol winner who auditioned in St. Louis in 2004. There was no way to pinpoint what the dozen tables of producers were looking or listening for. They did, however, vocalize a plea saying they couldn't hear Etta James' "At Last" another time.

Section 111 - my section - anxiously waited as the seven sections of singers who registered before them each took a turn, four at a time per table. Maybe luck was on Section 111's side, as it is season 11, 2011 -- but maybe not.

At least five people from the section would sing variations of Adele's "Rolling in the Deep." At least a quarter sang country songs. And a few hopefuls were gutsy enough to attempt Alicia Keys, Mariah Carey and Whitney Houston.

Two fifteen-year-old siblings from Arkansas sat with their parents, who took off work for the day and were ready to support their children's dreams -- even at three in the morning when they arrived.

Robert, a 23-year-old St. Louis native, sat alone, contemplating which of the four prepared songs he would sing. He went with John Legend's "Good Morning," and gave Legend a run for his money. He smiled and claimed his brother, sitting in one of the last sections to audition, had a better voice, and he was just there for the experience. I don't know if he made it to the next round.

It came to my group of four: a college-aged woman, a fifteen-year-old girl, a recent high school graduate and me. We were all rejected. In the first four hours of auditions, only three made it past the producer at table five. He had a mustache like Captain Morgan, and said callously and in a rehearsed manner "You were all very good, but I'm going to have to pass."

A reluctant staff member clipped each of our blue bracelets, which we got at registration, and we exited the premises, where cameras were taking footage of mostly heartbroken criers. The high-school graduate deemed the walk, "the tunnel of shame."

The cameraman seemed dismayed, saying we looked "too happy" when she and I came out laughing off our rejections. "You sang the hell out of that," I said

"I was too much personality for them to handle anyway," she replied.

The great majority of those who auditioned would not continue the Idol journey. Oh well: the Beatles were rejected from a recording company that didn't like the sound, Elvis was fired from the Grand Ole Opry and John Mayer's teachers at the Berklee College of Music didn't think he had what it takes.