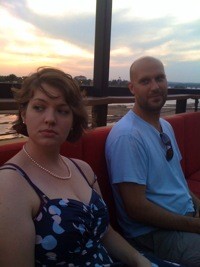 Roughly half of St. Louis' finnest fiddlin' folk/Americana outfit, the Dive Poets, took to the road recently -- Jeff York and Renato Durante stayed home with new babies, and Eric Sargent, Karl Eggers and Anna Moffatt comprised an acoustic lineup. They took Beth Bombara with them, and the four played in various combinations at shows in Missouri, Oklahoma, Texas and Louisiana. Things started off a little rough with some early vehicle breakdown, but they were able to push through all the way to a final show at the Euclid Records in New Orleans. All four thought about a few highlights and words of wisdom -- their "mind meld" is below.

Kiernan Maletsky: What did you travel in?

The Dive Poets: We started out in a Ford Escape, but ended up in a 1994 White Ford Explorer. On the first night of the trip, as we were pulling onto the offramp from I-70 in Columbia, our fierce orange chariot (the Ford Escape) decided to shut down. You could turn the key and it started just fine, but as soon as you put it into gear, it would shut down. We managed to get it to a nearby Home Depot parking lot and called AAA. The driver that showed up was a whole different kind of character, but that's another story. We had it towed to The Bridge's (Columbia, MO venue) parking lot, and Karl's Father-in-law drove into town and got it into limping shape so it could make it to Kansas City, where he really came through with a replacement vehicle (the Ford Explorer). It was a stressful drive from COMO to KC for Sarge and his baby orange chariot.

What was your cheapest meal?

We cooked canned chicken and black bean tacos at 2:30 a.m. in a Cracker Barrel parking lot somewhere between Shreveport and New Orleans. We had a camp stove and set it on the curb. Fortune smiled upon us and the sprinklers turned on, so we used them to rinse off our dishes. The townies pulling into the gas station didn't quite know what to think of us.

Which venue treated you the best?

This is a tough one, because we were fortunate that all of the venues we played were very hospitable to us. The Blue Moon House concert in Oklahoma City stands out, though, because they fed us and let us stay with them. That was a great night. Eventually we ended up at a college house filled with interesting folks, strolling down the middle of Oklahoma City streets at three in the morning with walkin' drinks. You could say it was a good night, but we'd call it a great one. The people of Oklahoma were very good to us.

Playing Euclid Records in New Orleans was a lot of fun, too. James was a great host and treated us very well and he even showed us around the city a bit. New Orleans in general was a highlight of the trip for us.

Our show at The Sound Pony in Tulsa was wonderful, as well. Never has a venue manager gotten on the house PA and asked people to buy merch, so that was nice.

Where did you sleep?

On floors, beds, in one hotel and in the car. The only place we didn't sleep was outside (which is probably a good thing).

Who was the most interesting person you met?

Tara and Randy Feuerborn in OKC. They were two of the nicest (and most unique) people we encountered on our trip, and they were both awesome artists. They had a giant bust of Woody Guthrie in their living room that Randy sculpted. Also, we would be remiss not to mention the very nice, but "eccentric", lady in Shreveport who showed up at the venue and took a heightened interest in Beth (who can blame her?) and insisted we stop by her house so she could give Beth some vintage clothes as a way of saying thanks for playing.

Any interesting non-show sights/experiences along the way?

We stopped at the Gilcrease Museum in Tulsa, which is apparently "One of the nation's largest and most comprehensive collection of Native American & American West art and artifacts." We had great barbeque and fried pies somewhere in East Texas. We also stopped and poked around a place called Caesar's Barn antiques in East Texas. We stayed two nights in New Orleans, just soaking in the culture and music. It was Anna and Beth's first trip to New Orleans, so that was pretty exciting and we sampled the local food and music. We walked around Bywater, the Garden District, and Magazine Street a bit; everywhere we went there was music and that's mainly what we took away from it... the town is 100% saturated with music, and they seem to value their artists and musicians in a very fierce way.

What piece of advice do you have for other bands heading out on tour?

Get AAA, and pay the extra for the "Plus" option! Having that saved us a bunch of money. Also, bring your own food: non-perishable things like canned beans, canned meat, ramen noodles; peanuts are essential. Also, let yourself have one good (hot) meal a day.

Plan your route carefully ahead of time to cut the stress of driving.

Know where you're staying before you get to the city, if at all possible.

What did you give up in order to go on this tour?

We all took off work, and made some hygiene and sleep sacrifices. It's hard to complain about being able to do what you love full time, if only for a week.

What did you gain on this tour?

We made a lot of friends, hopefully a couple fans and definitely gained an appreciation for Oklahoma, Texas and New Orleans and the awesome music being made there. We also learned how to work outside the comfort zone of our hometown and how to win over a new crowd. Overall it was a rewarding experience and we definitely want to head back out soon.

Is your band about to embark on or just returning from a tour? Email me at kiernan.maletsky@riverfronttimes.com to be considered for this feature.